Session 3 of the 51st JAIF Annual Conference featured presentations by representatives from four Japanese and foreign manufacturers on the innovations required for nuclear energy to continue to play an important role into the future. Serving as the moderator was Dr. Jun Nishiyama, assistant professor of engineering at the Laboratory for Advanced Nuclear Energy, part of the Institute of Innovative Research at the Tokyo Institute of Technology. 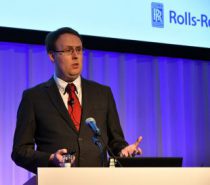 First to speak was Dr. Martin J. Goodfellow, strategy and business development manager at Rolls-Royce, a manufacturer of diverse power systems (including commercial and military aircraft engines), who described his firm’s work on small modular reactors (SMRs). Given worldwide efforts to reduce greenhouse gas emissions—for example, stepping up the use of electric vehicles—he said lower-carbon power sources and nuclear energy were becoming even more significant. In response to concerns about nuclear power, including anxiety over safety and long construction periods, he emphasized that safety throughout the lifecycle is key to social acceptance, and that longer construction periods increase costs. He then explained Rolls-Royce’s SMR design concept, which recognizes simplification, short-term construction and program certainty as essential factors. Pointing out that making maximum use of digital technology in SMR systems would yield substantial cost reductions, Dr. Goodfellow stressed the importance of innovation for the future of nuclear energy. 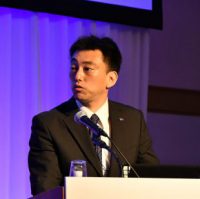 Next to speak was Group Manager Yasutaka Aoki of the System Planning Group, System Design & Engineering Department, Isogo Nuclear Engineering Center, Nuclear Energy Systems & Services Division, Toshiba Energy Systems & Solutions Corporation, who made a presentation on technological development toward improving the safety and reliability of nuclear power plants (NPPs). Among other things, he discussed the creation of a virtual plant utilizing AI to train on-site workers, as well as R&D on the reduction of high-level radioactive waste (HLW), part of the Japanese Cabinet Office’s Impulsing Paradigm Change through Disruptive Technologies Program (ImPACT). Through activities under ImPACT, the firm hopes to resolve issues of power sources and waste reduction simultaneously by capturing, collecting and reusing useful elements from high-level radioactive wastewater, including nuclides with half-lives of hundreds or thousands of years. Toshiba Energy Systems & Solutions will continue, he said, to take on challenging technological issues and ensure that the fruits of its experience remain available for future generations.

Another featured speaker was Senior Vice President David Sledzik of Sales and Commercial Operations, Nuclear Plant Projects, GE Hitachi Nuclear Energy (GEH), who explained his firm’s development of the low-cost, 30-MW SMR BWR known as the BWRX-300. Incorporating GEH’s experience in the development of its ESBWR, the BWRX-300 was designed not only to substantially reduce the volume of a plant, but also the volume of needed concrete by having the reactor installed underground. He said that GEH expects the design to be competitive in the market. Sledzik also explained the development of the sodium-cooled fast reactor known as “PRISM,” boasting inherent, passive safety features, evincing the company’s enthusiasm for innovation in next-generation reactors.

The final representative to give a presentation at the session was Sales Leader Alexey Sachik of the Project Management Consulting Services division of JSC ASE, a Russian engineering firm with a wealth of experience in the area of nuclear monitoring control systems for the nuclear industry. He introduced the company’s MULTI-D Digital Platform, intended to facilitate efficient plant management.

At the end of the four presentations, the moderator stated that it was necessary to innovate for the future via cooperation across different fields. He concluded by reiterating what the young physics enthusiast Taylor Wilson had said earlier in a special presentation: “Innovation will come when other young people are shown that nuclear power is an exciting field.”