On May 17, Tomoko Murakami, senior economist at the Institute of Energy Economics, Japan (IEE, Japan), gave a presentation at the Japan Atomic Energy Commission (JAEC) on changes in the domestic and global environments—a major topic in debates on the utilization of nuclear power. 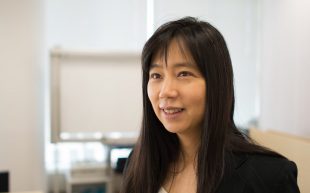 In terms of the domestic business environment for nuclear power, the costs of thermal power—Japan’s main substitute power source—have increased, as only two nuclear power plants have been restarted since the new regulatory standards came into effect, while those NPPs not operating continue to run up costs for maintenance and repair, safety measures, and more.

Murakami noted the importance of paying attention to the investments being made by power companies. She said that extending the operating lifetimes of existing reactors, building new NPPs and maintaining a certain capacity factor were “necessary conditions” to achieve a 20% to 22% share for nuclear power among Japan’s power sources by 2030 in the so-called “energy mix.”

The most economical power source varies from country to country. In Japan, as calculated in 2014, Murakami said that it was nuclear power, even taking into account the costs for dealing with risks of accidents and policy measures.

She explained that in the United States and Europe, where power deregulation is further advanced than in Japan, nuclear operators cannot fully deal with changing investment environments. In Japan, nuclear power, which is a quasi-domestic resource and emits no CO2, has been assigned the role of base-load power source.

Still, the initial investments required for nuclear power are huge. How to promote it continuously and efficiently, while ensuring facilities and installed (gross) capacity, without killing the prospects of other low-carbon technology development, she said, are issues for the survival of nuclear businesses in a future competitive environment.

As for global trends, only Japan saw a changed environment for nuclear power after the accident at the Fukushima Daiichi Nuclear Power Plants in March 2011. Elsewhere, she said, the driving factors for nuclear development have remained the 3E’s of energy security, economic efficiency, and environmental protection.

At the May 17 meeting, JAEC Commissioner Nobuyasu Abe questioned why, if nuclear power was supposedly the cheapest, as Murakami said, people were still concerned about its survival once the electric power market is deregulated.

Murakami responded by explaining that in addition to nuclear power’s “tall wall” of initial costs, major risks are presented by the inability to foresee when safety examinations will be completed given the way that the Nuclear Regulation Authority (NRA) currently conducts them.