On June 18, Chairman Toyoshi Fuketa of Japan’s Nuclear Regulation Authority (NRA) exchanged views in Tokyo with Governor Issei Nishikawa of Fukui Prefecture. The meeting was scheduled as an opportunity for the NRA to hear the wishes of the local municipality prior to the start of decommissioning of the prototype fast breeder reactor (FBR) Monju in Fukui Prefecture. 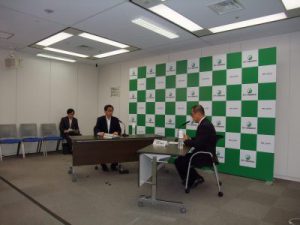 Governor Nishikawa, however, used the meeting to voice his dissatisfaction with such matters as the examinations that NRA conducts before restarting nuclear power plants (NPPs). “The examination process does not take time into consideration,” he said. “Delays in the examinations have adversely affected local municipalities’ abilities to take economic and employment measures, which troubles us extremely. The examinations focus on documents in Tokyo, far from the actual sites.”
Currently, various municipalities in Japan are starting to require power companies to obtain consent from additional parties before restarting NPPs—that is, bringing in other municipalities in addition to the siting areas themselves. The governor called the arguments in favor of doing so “superficial,” adding that those additional parties “could not understand the actual conditions of the communities hosting the NPPs.”
Fuketa acknowledged that there were issues related to the NRA’s examinations, but argued that it was very important “not only for the industry but for the regulatory authority to secure good human resources,” implying that merely increasing the number of personnel so as to expedite the examinations was not enough. He also said that a common understanding with operators was necessary for the examination process to proceed.
He went on to say that the NRA would treat operators as “grown-ups” and establish proper relationships with them, so that they might approach safety “on their own terms.” It would not be desirable, he said, for operators to do only “what they are told” by the NRA, as that would be “quite dangerous for improving safety.” He distinguished between examination-related matters and any sense of economy, showing the NRA’s uncompromising stance on that question.
In March, the Japan Atomic Energy Agency (JAEA), which operates the FBR Monju, received the NRA’s approval for its decommissioning plan, enabling it to  start the work. In the latest session, the governor asked NRA as the regulatory authority to strengthen its surveillance of the site.
Given Monju’s special nature and construction—its sodium coolant burns violently when exposed to air or water—its decommissioning is expected to be difficult. According to the plan, spent fuel will begin to be removed next month (July 2018). The decommissioning process is then expected to take some thirty years after that, until FY47.