On October 18, the Japan Atomic Energy Agency (JAEA) held the opening ceremony of its Naraha Remote Technology Development Center, with partial operation begun. The center is located in an industrial park in Naraha Town, Fukushima Prefecture, about a three-hour drive north of Tokyo. 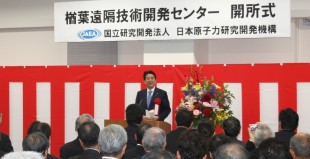 JAEA is building the center as part of its effort to decommission the Fukushima Daiichi Nuclear Power Plants. Among other things, the center will develop and test the remotely-controlled robots necessary for investigating and working inside the reactor buildings before nuclear fuel debris is removed.

The center will also be involved in plans to help realize the economic recovery of the region under the “Fukushima International Research Industry City” vision, also known as the “Innovation Coast” scheme. The aim is to develop a new research and industrial base in the area by 2020. 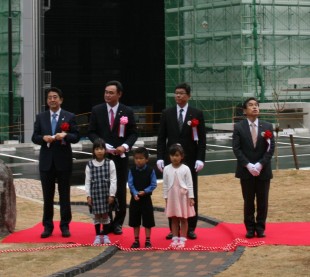 Attending the ceremony were Japanese Prime Minister Shinzo Abe, who was visiting the prefecture at the time, along with such dignitaries as Minister Tsuyoshi Takagi of the Reconstruction Agency and Fukushima Governor Masao Uchibori.

Afterwards, the group of officials, together with students from the Fukushima National College of Technology and a large group of reporters, observed the demonstration of a scorpion-shaped robot used to investigate the interior of reactor containment vessels.

In his greeting, the prime minister said that he hoped that Fukushima Daiichi’s decommissioning—itself a “challenge of the unknown”—would proceed safely and as quickly as possible. He emphasized his enthusiasm for the Fukushima recovery, saying, “Technology will draw people who will create new technology.” He added that he expected the Naraha Remote Technology Development Center to be “one more stimulus for reconstruction,” and that Fukushima would be “reborn” as a place where new industries will blossom. 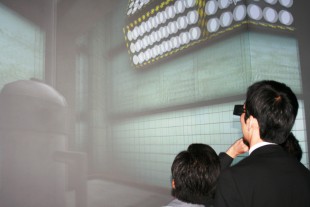 The sections of the center currently in operation include the living quarters for users, conference rooms, and the research management building to be used for training workers, with virtual-reality (VR) systems. The entire center is expected is to begin full operation in fiscal 2016 (ended March 31, 2017).

JAEA Chairman Toshio Kodama, meeting a group of reporters after the ceremony, said that his organization would fulfill its role in carrying out R&D toward the decommissioning of Fukushima Daiichi. He stressed the need to place priority on developing technology to repair leakage spots, as well as to stop leakage at the bottom of reactor containment vessels (RCVs). The verification and testing of the RCVs will be conducted at the experiment building that will be completed next March.