On April 9 and 10, the 51st JAIF Annual Conference was held in Cosmos Hall at the Toshi Center Hotel, Chiyoda-ku, Tokyo, under the theme, “Nuclear Power, a Key Energy Solution for the Future?” Over two days, participants discussed such topics as energy policy, the current state of restoration in Fukushima, the promotion of international activities by nuclear vendors, and innovations in nuclear power. 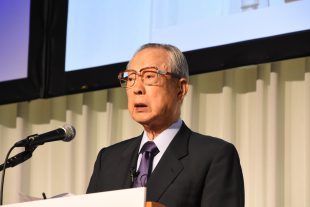 In his keynote address at the opening session, JAIF Chairman Takashi Imai looked back on the seven years since the devastating earthquake that struck eastern Japan on March 11, 2011. He referred to improvements in the working environment toward decommissioning at the Fukushima Daiichi Nuclear Power Plants (NPPs) of the Tokyo Electric Power Co. (TEPCO) and the progress made in contaminated water measures. He then cited the need to remove spent fuel and dispose of accumulated water in the future. Given, however, that many issues remain in reconstructing Fukushima—including unfounded fears and rumors regarding products from the prefecture—he said that the domestic nuclear industry would have to make concerted efforts toward restoration and reconstruction.

Turning to energy policy, Imai pointed out that it was difficult for Japan, surrounded by the sea, to swiftly develop facilities, equipment and systems to expand renewable energy. He went on to say that renewable energy and nuclear power are both essential for us to benefit from an inexpensive, stable supply of electricity while squarely tackling global warming issues. He emphasized that NPPs need to be constructed for CO2 emissions to be reduced by eighty percent by 2050. At the same time, he drew attention to the operating status of existing NPPs, saying that only seven reactors had cleared the new regulatory standards implemented since 2011 and had managed to restart. He expressed concern that the use of thermal power plants because of the prolonged suspension of the country’s NPPs would increase not only CO2 emissions but also the national economic burden in the form of imported fuel costs.

Looking overseas, Imai said that such countries as China and Russia were actively constructing new NPPs, and that the installed (gross) capacity worldwide had reached 490GWe, a new record for the third consecutive year. 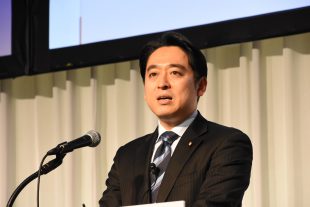 For nuclear power to play a key role in the future—a role noted in the theme of the conference—Imai emphasized, among other things, that viable NPP sites are needed more than anything else, and that nuclear technology must be made more attractive through innovation. He called on all the participants to make the conference fruitful through two days of vigorous discussions.

Speaking as an invited guest, Parliamentary Vice-minister Daisaku Hiraki of Japan’s Ministry of Economy, Trade and Industry (METI) said first that his ministry’s top priorities were the restoration of Fukushima in general as well as measures to deal with the large volume of accumulated water at the Fukushima Daiichi NPPs. He then talked about various issues in ensuring technology and human resources to support nuclear safety, including the subject of recovering social confidence in nuclear power, which is now being addressed by the Advisory Committee for Natural Resources and Energy. 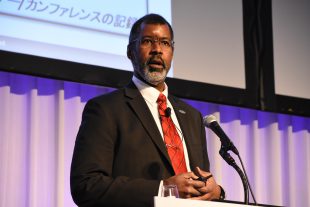 Magwood’s presentation was entitled “Nuclear Energy: Navigating a Complex Future.” Given that energy-associated CO2 emissions account for sixty percent of global CO2 emissions, and that three-fourths of all generated electricity depends on fossil fuels, he said that reducing CO2 emissions and the nature of our energy use itself were key challenges. He then outlined trends in major countries. In the Paris Agreement, an international framework adopted at COP21 in 2015, 195 countries agreed to develop measures to hold the global temperature rise this century below 2 degree C, illustrating the level of increased global interest in reducing greenhouse gas emissions.

He then elaborated on the IEA’s scenario for keeping the global temperature rise within 2 degree C, saying, “Economically, too, both renewable energy and nuclear energy are needed to meet the COP21 goal.” He stressed that while nuclear power requires huge capital investment, it is quite cost-competitive as a long-term power supply source. He went on to introduce “Nuclear Innovation 2050,” issued through the activities of the Generation IV International Forum (GIF) and OECD/NEA for spurring innovation. 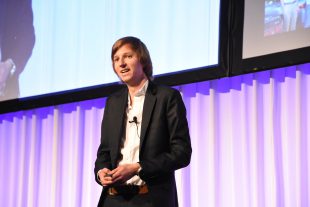 Next, Taylor Wilson, a 23-year-old American nuclear genius and entrepreneur who is also known as the “boy who played with fusion,” started out his presentation by outlining his experiences achieving nuclear fusion at the age of 14. He said that R&D in the areas of renewable energy has been highly repetitive, with the same data being analyzed repeatedly. He emphasized that R&D in any field, including nuclear power, could be expedited by adopting a monthly rather than a ten-year focus. Wilson then went on to explain his current activities in applied research on radiation biology and materials development, along with the basic design and development of a nuclear reactor—a modular nuclear battery with passive safety—which he called his “newest challenge.”