On September 8, Japan's Kansai Electric Power Co. (Kansai EP) issued a plan for work to improve the safety of its Takahama-1 and -2 Nuclear Power Plants (PWRs, 826MWe each), hoping to continue operating them until they reach a lifetime of 60 years. The plan was also duly reported to Fukui Prefecture. 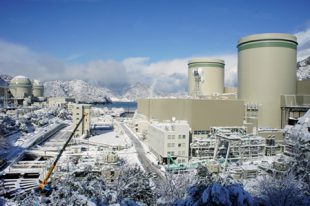 Having cleared safety examinations by the Nuclear Regulation Authority of Japan (NRA) under the country’s new regulatory standards, the two units were given approval in June 2015 to have their operating periods extended to 60 years, or two decades beyond the original 40 years. It was the first time that domestic NPPs had been granted such clearance.

According to the plan, the major safety improvements at the two Takahama reactors are as follows: (1) installation of shielding at the upper parts of the containment vessels, (2) replacement of refueling water tanks, (3) additional fire protection, (4) relocation of the seawater intake facility for Unit 2, and (5) replacement of central control panels.

Kansai EP will begin work according to the plan as early as September, aiming at completion in fiscal 2019 (ending March 2020).

Shielding the upper parts of the containment vessels involves installing ferro-concrete top domes to reduce radiation emitted from the vessels in severe accidents, as well as exposure doses of workers outdoors. That work will start in February 2017, and end in November 2019.

Meanwhile, existing analog central control panels will be replaced with the latest digital ones to improve serviceability, and allowing operation and monitoring via a large display apparatus and touch panels.

In releasing the plan, Kansai EP reiterated, “From the perspective of the ‘3E+S approach’ (energy security, economic efficiency, and environmental protection plus safety), nuclear is a key power source. We will continue promoting it as the core of our business at power plants whose safety has been confirmed by the government, including those in operation for more than 40 years.”

Kansai EP will carry out the work with a priority on safety, while seeking to obtain understanding from local communities.

Takahama-1 and -2 have both been shut down since periodic inspections in 2011. Kansai EP announced in May that it would complete the work during fiscal 2019, subject to changes depending on progress of the work, and resume operations during the same period.

In addition to the two Takahama units, the NRA is currently examining the same power utility’s Mihama-3 (PWR, 826MWe) to verify if a lifetime extension to 60 years is warranted there as well.