The Tokyo Electric Power Co. (TEPCO) has developed a plan to release contaminated groundwater from the accident-damaged Fukushima Daiichi Nuclear Power Plants into the adjacent sea, with the understanding of local fishermen's groups and other related parties. With the increasing accumulation of the water at the site, the resolution of the issue has been seen as crucial toward the reactors’ eventual decommissioning. 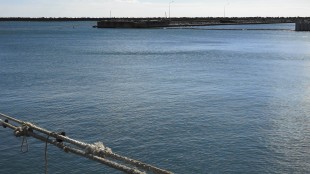 The radiation levels of the groundwater at the Fukushima Daiichi site are far lower than those of the highly contaminated water accumulated inside the reactor buildings and turbine buildings. Initially, about 400 tons of groundwater flowed into the four reactor buildings every day, but that amount has since been reduced to some 300 tons on account of groundwater-bypass and other measures. The current plan to release the water into the ocean is expected to further cut the volume to about half.

According to the plan, water will be pumped from subdrains (a group of wells in the vicinity of the reactor buildings and turbine buildings), and treated at a purification facility to reduce the concentrations of radioactive materials (other than tritium) to between 0.001 and 0.0001 their original levels. TEPCO and a third-party organization will then carry out water-quality analyses. Once the quality is confirmed to have met the criteria (i.e., the operational targets), the water will be released into the port. The power company has already explained the plan thoroughly to the parties concerned.

On August 25, the Iwaki Fisheries Cooperative Association, a local fisheries group, approved the plan at a directors’ meeting. On the same day, TEPCO responded to a written request from the Fukushima Prefectural Federation of Fisheries Cooperative Associations, in which it demanded such actions as strict water-quality management, safety monitoring by a third-party organization, timely and complete information disclosure, and compensation for damage due to unfounded fears and rumors.

After making a deep apology to the local fisheries for the effects of the accident, TEPCO responded that it would strive to complete the operation of the subdrain and groundwater subdrain systems as quickly as possible through strict water-quality management according to operational policies, targets, and regular sampling. It also said that it would promptly begin closing the seaside water shielding wall after confirming the operational state of the subdrain system and other water treatment facilities.

Together with a third-party organization, TEPCO will conduct water-quality analyses to confirm that the water in the temporary water storage tanks meets operational targets. The results of environmental monitoring, including those taken both inside and outside the port, will be provided to Fukushima residents and the public, and publicized extensively via the media. The overall picture of the subdrain plan and the status of the closing of the seaside water shielding wall will similarly be made known.

Meanwhile, TEPCO will properly compensate fisheries for damage even after full-scale operations have resumed—as it had previously—after fully considering individual circumstances and consulting with relevant parties, as long as a causal relationship is proven between the accident and adverse developments, such as depressed marine-product prices stemming from unfounded fears and rumors.

On August 25, TEPCO President Naomi Hirose visited President Hiroshi Kishi of the Japan Fisheries Cooperatives (known as “JF Zengyoren”) to report on the progress of his company’s activities on the matter. Regarding the operation of the subdrain and groundwater subdrain systems, the fisheries association asked the power company to implement fundamental measures—such as frozen-soil shielding walls—to ensure that contaminated water will be swiftly prevented from flowing into the sea.

JF Zengyoren additionally asked TEPCO to fully publicize the safety of the released groundwater, and to enhance and reinforce the monitoring system. It also requested the power company not to release the contaminated water into the ocean before the fishermen and the Japanese people nationwide had reached understanding on the matter. Moreover, it asked the Ministry of Economy, Trade and Industry (METI) to give proper guidance to the company.

On August 28, Governor Masao Uchibori of Fukushima Prefecture visited the METI building in Tokyo, where he met with METI Vice Minister Yosuke Takagi and TEPCO President Hirose. The governor conveyed his intention to accept the subdrain plan on the condition that the requested items would be fulfilled.

At a press conference held on August 26, Chairman Shunichi Tanaka of Japan’s Nuclear Regulation Authority (NRA) commented on the release of the groundwater into the sea, saying, “I think that using the subdrain is a big step forward, especially in terms of increasing overall safety”