The Tokyo Electric Power Co. (TEPCO) has compiled new data on the locations of melted nuclear fuel debris coming from the accidents at its Fukushima Daiichi Nuclear Power Plants (NPPs), which sustained damage in the tsunami of March 2011. It did that by investigating changes in temperatures within the reactors while different volumes of water were being injected into the reactor buildings. That allowed the locations of the debris to be estimated. 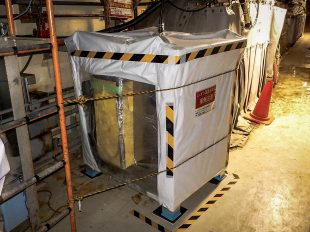 The findings are consistent with the results of other analyses, namely, those finding that most debris at the Fukushima Daiichi-2 NPP is at the bottom of the reactor pressure vessel (RPV). The power utility has been collecting available information to proceed toward the removal of the debris, seen to be the greatest challenge in the decommissioning process.

Core meltdowns occurred at Units 1 to 3 during the accident, generating debris. From the outset, TEPCO has been injecting water to cool it. More recently, the company gradually decreased the volumes of injected water from 4.5 to 3.0 tons per hour to provide a processing cushion for the facilities treating and purifying the contaminated water that had accumulated in the turbine building basements and other places. That became possible because calorific values had dropped substantially during the six years since the accident.

TEPCO made use of records of dozens of thermometers installed in each of the RPVs and elsewhere at Units 1 to 3. At Unit 1, temperatures near the control rod drive mechanism below the RPV rose as the volume of injected water decreased. The power utility believes that the debris that fell toward the bottom of the RPV was caught by the mechanism, becoming a heat source. Most of the debris is thought to have dropped to the bottom of the containment vessel.

TEPCO had earlier estimated the positions of debris at Units 1 and 2 using muon tomography, based on cosmic-ray penetration. The results match those of the investigation of temperature change using reduced injection water. The company will continue its investigations and try henceforth to ascertain the positions of the debris more accurately.