On October 26, the Tokyo Electric Power Co. (TEPCO) completed installing the shielding wall fronting the ocean next to the Fukushima Daiichi Nuclear Power Plants by treating the joints to improve the wall’s watertightness. The power company had begun the project in April 2012 to prevent oceanic pollution by blocking contaminated groundwater from exiting the site comprising Units 1 to 4. 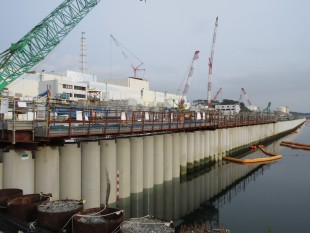 The wall, which extends approximately 780m, was constructed using 594 steel sheet piles. As a result, the risk has been substantially reduced that contaminated groundwater will overflow into the port area and ocean when the site is eventually decommissioned over the medium-range and long-range future.

TEPCO has said that the effectiveness of the new shielding wall in stopping leakage has already been seen in groundwater levels rising on the land side. It added that it would continue monitoring the port area.

After finishing the installation of the steel sheet piles on September 22, TEPCO used an underwater camera to confirm the soundness of the interior of the joints installed between adjacent piles, then poured mortar into the joints in two steps to improve watertightness. On October 26, it confirmed the condition of the joints, and deemed the process of closing the wall complete.