On May 31, the Tokyo Electric Power Co. (TEPCO) released a progress report on the decommissioning at the Fukushima Daiichi Nuclear Power Plants. 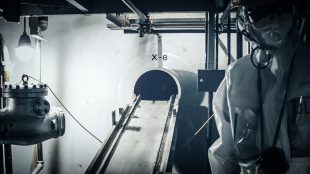 Four days earlier, on May 27, the power company began transferring some of the spent fuel currently stored in a common pool to a temporary facility at the site, for storage in dry casks, to create enough space in the pool to store spent fuel taken from the Unit 3 spent fuel pool when that is eventually removed.

At the temporary storage facility, TEPCO will pack the spent fuel in dry casks providing shielding and heat removal (with natural air circulation outside the casks) and store it under stable conditions.

By August, 483 spent fuel assemblies from the common pool will have been transferred to the facility using seven transport and storage casks, in anticipation of the arrival of 566 fuel assemblies (including unused 52 assemblies) from Unit 3.

On May 11, a problem was found at Unit 3—where a fuel handling machine has been in trial operation since March—inside a control panel for a crane used for moving fuel transportation containers to the ground. TEPCO nevertheless aims to begin removing fuel from the spent fuel pool around mid-FY18, as initially planned.

TEPCO will determine a method for removing fuel debris from the first unit by FY19 (April 2019 to March 2020), and the status of that effort was also included in the status report on May 31. The approach is to proceed after heightened understanding is made of internal conditions, the nature of the debris, and the effects when removed.

As that has not yet been fully completed, though, the effort will proceed gradually and incrementally, as follows: first investigating the interiors of the primary containment vessels (PCVs) through sampling, then carrying out small-scale removal of debris, followed by large-scale removal.

As for small-scale fuel removal, one promising method seems to be using a “X-6 penetration” rail to access the interiors of the PCVs (found in all the units) from the side, in order to exchange the control rod drive mechanism (CRDM). That method is already being used for inserting investigation devices into PCVs.