On April 9, President Michael Shellenberger of U.S. Environmental Progress, famous as an environmental activist who supports nuclear power, visited Japan to make a special presentation at the 52nd JAIF Annual Conference. At a press conference after the presentation, he explained why he had changed his view of nuclear power, something he once opposed. 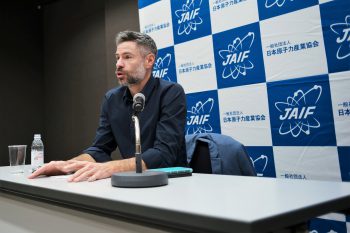 Shellenberger appears in the documentary film “Pandora’s Promise,” which features environmental activists who have researched the global energy situation and become supporters of nuclear power, advocates for its important role in the prevention of global warming. At the press conference, he expressed the view below on disposal of radioactive waste and the nuclear industry’s adherence to underground burial of it.

His statement is as follows:

My thoughts on nuclear energy changed gradually as I entered my 30’s, at the beginning of the century. I wanted to tackle the global warming challenge professionally. I thought a technological solution to radioactive waste disposal would readily emerge. Renewable energies were widely considered promising, but practical progress was still lacking.

A proposal was issued that the government invest in renewable energies for ten years to bring them to a level competitive with fossil fuels. Immediate issues were the intermittency of some renewable energies, and that, to derive sufficient electricity from solar or wind power, enormous land areas were needed. Attempts to solve those problems brought new economic and environmental issues to light. Eventually a person whom I respect very much persuaded me to reconsider nuclear power.

I had been a teenager at the time of the Chernobyl accident. I had a strong aversion to nuclear power. Yet, in reading the report by the World Health Organization (WHO) several times, I was struck that there had been very few injuries or deaths from the radioactivity released in the accident. The more I came to know about nuclear energy, the more my thinking evolved. At some point, my views may become fixed—they certainly are not yet.

The extent of people’s fears of radioactive waste and nuclear power can be attributed to traumatic feelings about the power of the then-innovative technology seen in the atomic bombings nearly seventy-five years ago. Those experiences reverberate today. Since then, no one has been harmed by radioactive waste, and the volumes of it are relatively small. In contrast, according to WHO, air pollution as a result of burning fossil fuels or biofuels kills seven million people annually. When today’s solar panels reach the ends of their lives twenty or twenty-five years from now, the volume of that waste will be 200 to 300 times the volume of nuclear waste.

When it comes to radioactive waste from nuclear power, the mass media, the public, governmental organizations, the industry itself—no matter whether they are pro- or anti- nuclear power—all tie themselves to the wrong question: “What should we do with it?” That question has already been answered: We should confine and store it.

Our thinking on that, however, has been formed in the anthropological, psychological sphere.

The nuclear industry is committed to the underground burial of radioactive waste. Above ground, it would be possible to monitor the waste continually and confirm that it remains stable. Anthropologically, however, burying it is a ceremony, interring something no longer needed, beneath the ground.

When I listen to people talk about radiation, it sounds like they are talking about an evil spirit rather than a physical phenomenon. There is an impulse common to every culture to rid ourselves of the unwanted and to bury it forever—that is, to put nuclear power back in Pandora’s box.

I want people to realize why they think like that. I want them to see that they are unconsciously seeking to eradicate a powerful technology.