On April 9, the 52nd JAIF Annual Conference opened at the Tokyo International Forum in Chiyoda City, Tokyo. For two days, a broad range of discussions took place under the keynote theme, “Tapping the Full Potential of Nuclear Energy.” 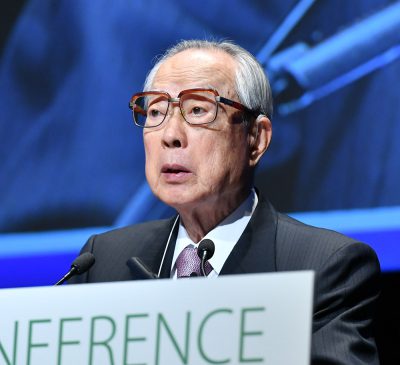 At the opening ceremony, Chairman Takashi Imai of the Japan Atomic Industrial Forum (JAIF) gave the keynote address. Regarding current conditions in the affected areas eight years since the March 2011 accident at the Fukushima Daiichi Nuclear Power Plant(NPP), he said that he was “very glad” about the lifting of some of the evacuation orders in Okuma Town set for April 10, and that the nuclear industry would continue its efforts helping Fukushima to reconstruct.

Looking back at recent violent weather conditions causing various natural disasters worldwide, Imai cautioned that further delays could not be afforded in dealing with global warming issues. In order for Japan to fulfill the international promise it made in the Paris Agreement to reduce its greenhouse gas emissions, he stressed that “the use of nuclear power, which emits no CO2, is essential.”

In order to achieve a nuclear power-source component level of 20 to 22 percent, as included in Japan’s composition of power sources (the so-called “energy mix”) advocated in the fifth national Strategic Energy Plan, he said, “It will be necessary for Japan to have thirty or so nuclear power plants (NPPs) in operation during the coming decade.”

Together with restarting existing NPPs, he noted the need to extend their operating lifetimes and to complete the nuclear fuel cycle at an early juncture, as well as to construct new NPPs and replace older ones, with an eye on 2050.

As for efforts to enhance nuclear safety, Chairman Imai referred to the Atomic Energy Association (ATENA), established in July 2018, saying that he expected it would demonstrate strong leadership “on behalf of the nuclear industry.”

Referring to developing and securing the necessary human resources to support the industry, he also stressed the need to advertise the appeal of a nuclear power career among young people, holding up the “establishment of projects with dreams through innovation.”

Returning to the theme of the conference, he concluded his address by saying, “The promise of nuclear power is not only the supply of energy. I look for fruitful discussions today and tomorrow about what must be done for nuclear energy to fulfill its role from a broad mix of viewpoints.” 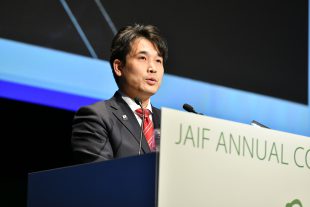 Hirofumi Takinami of the Ministry of Economy, Trade and Industry (METI)

Next to speak on the first day of the JAIF Annual Conference was Parliamentary Vice Minister Hirofumi Takinami of the Ministry of Economy, Trade and Industry (METI). He told the participants that the lifting of evacuation orders in Okuma Town was a first step forward to reconstruction, adding that METI would “intensify its efforts to be close to the residents on that vital, important issue.”

He went on to say that nuclear power was essential to carrying out a responsible energy policy, calling attention to the necessity of further nuclear innovation as an option for driving energy conversion toward a future zero-carbon society.

Additionally, describing the loss and aging of experienced engineers and technicians as a “pressing” issue in Japan’s challenge of continuing to use nuclear energy stably and putting a priority on safety, Takinami said that METI would pursue joint public-private efforts to maintain and strengthen nuclear technology and human resources. 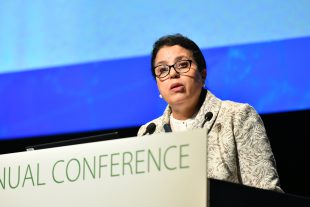 Najat Mokhtar, deputy director general and head of the Department of Nuclear Sciences and Applications at the International Atomic Energy Agency (IAEA)

Next, three special presentations were given, the first by Najat Mokhtar, deputy director general and head of the Department of Nuclear Sciences and Applications at the International Atomic Energy Agency (IAEA), the second by Michael Shellenberger, founder and president of Environmental Progress, and the third by Professor Kazuto Hongo of the Historiographical Institute at the University of Tokyo.

IAEA’s Mokhtar spoke on the theme, “Nuclear Science and Technology: Contributing to the Sustainable Development Goals (SDGs).” Explaining the roles that nuclear science and technology can play in society, she cited nine of the seventeen SDGs that IAEA is currently working on, including the following:

Mokhtar wrapped up her talk by saying that the IAEA would take up even more of the SDGs in the future. 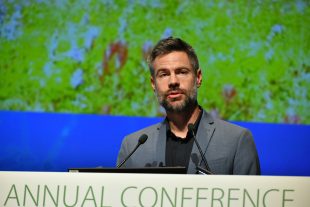 Environmental Progress President Shellenberger, the next presenter, spoke on the theme, “Nuclear, Panic & Danger: Why the Japanese Turned against Nuclear Power, and What Is Necessary for Them to Accept It Again.”

After the accident that struck the Fukushima Daiichi NPP eight years ago, many Japanese became opposed to nuclear power, with some of them wanting to have every NPP in the country decommissioned. Shellenberger’s view on the issue was that those people had been affected by the accident, and had a deep-rooted sense that NPPs are simply “reduced” versions of nuclear weapons.

He stated his own awareness that nuclear weapons were destructive, and that possessing them could be a deterrent to enemies, but also noted that the Japanese felt a low sense of danger toward threats from other countries. He noted that according to a public opinion poll conducted, in case that the Senkaku Islands in the East China Sea were occupied by China, 55.7 percent of Japanese respondents wanted the United States to deal with the issue, and 33 percent militarily. 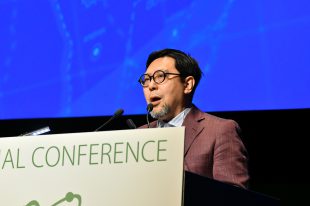 The last special speaker was University of Tokyo Professor Hongo, who focused on the theme, “History and Technology in Japan: Taking Firearms as an Example.” He compared the close connection between technology and societal development to the case of castle walls in the past. When castle walls were first built, they were simply crude piles of large stones. Thirty years later, relevant techniques—in other words, technology—had been improved, with better walls resulting.

The same thing, he went on to remark, could be said of nuclear technological innovation. The role of nuclear power in potentially supplying energy for the seven billion people living on Earth was great, Professor Hongo said.

He concluded by telling the audience that the country holding out the greatest promise for nuclear science and technology was Japan, given its experience of the Fukushima Daiichi accident.