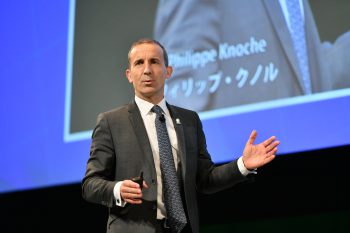 He talked about five topics:

Global warming, Knoche said, is an emergency, and debate is overheated in France on environmental issues. Students are asking, “Where are the adults? We will be fifty years old in 2050. We have seen the Kyoto and Paris Agreements, and CO2 emissions continue to rise.”

Nuclear power, emitting less CO2, is a solution, Knoche emphasized. According to the World Energy Outlook (WEO), part of the answer is to increase nuclear electricity’s share to 80 percent by 2050.

Toward the achievement of zero carbon in France by 2050, the French programmation pluriannuelle de l’énergie (PPE) (the Multiannual Energy Plan) has put forward the following targets:

Additionally, energy-efficiency renovations will be carried out on 300,000 homes by 2023, and more than 600,000 fossil-burning vehicles (a major source of pollution) will be converted to electric, aiming at a fourteen-percent reduction in overall energy consumption by 2028. By 2035, power sources will be diversified, and the share of nuclear power will be reduced to 50 percent of the total amount generated.

Renewable energies, hydropower and nuclear energy—each low in CO2 emissions—account for 95 percent of electric power in France. Future efficiency efforts in housing and transportation will increase the feasibility of achieving zero carbon.

As mentioned above, France’s aim for nuclear power is to reduce its share to 50 percent by 2035. To do so, the country is considering a nuclear power rehabilitation plan whereby fourteen nuclear reactors will be shut down by the same year. Reactors will, however, only be closed after they have been operated for fifty years. The French government and Electricité de France (EDF) will consider measures to reduce costs for new reactors, financing models, etc., toward 2021.

Nuclear energy, though an object of some criticism, is highly economically efficient, said Knoche. In turn, anti-nuclear forces turn that fact on its head, saying that because nuclear energy is “cheap,” it is actually a “barrier” to renewable energies. As a result, President Emmanuel Macron, for example, tends not to mention nuclear power’s economic efficiency.

A recycling and disposal strategy is proceeding in the French nuclear sector. Around 10 percent of electricity in France is already generated with recycled materials, including MOX fuel. Recycling provides not only economic benefits, but also stable supplies of energy.

The second stage will see research carried out on the multi-recycling of plutonium at PWRs. Under a development program, spent MOX fuel will be repeatedly used. The target is to start operation on a trial basis in 2025. Research will be continued to the next generation, and will be used in reactors to be newly built in 2030 and later.

In the third stage of research, development will continue, and recycled materials will be used in fast neutron reactors. Development of a next-power reactor is being carried out with a Japanese partner as an example of international cooperation. In the same stage, research will also be conducted on a closed fuel cycle.

Orano, said Knoche, provides a diverse range of nuclear services, ranging from uranium mining, uranium conversion, the enrichment and production of fuel, to fuel recycling and logistics, and more. Around the world, it boasts 16,000 employees, including 2,000 experts and specialists on the decommissioning and dismantling of reactors. In addition, in the area of medical care, the company is carrying out clinical trials on cancer therapy.

Knoche concluded his presentation by saying, “Nuclear energy can contribute not only to the fight against global climate change, but also to medical fields such as cancer therapy.”