In the Leader Perspective section of the 52nd JAIF Annual Conference, held on April 10, Director Massimo Garribba of Nuclear Energy, Safety and ITER, DG for Energy, European Commission (EC) gave a presentation entitled “The Role of Nuclear Energy in the EU Low-carbon Future.” 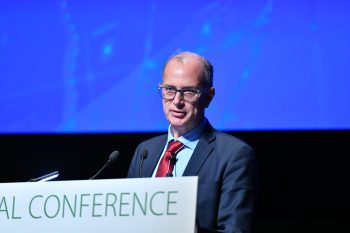 He began his presentation by saying that without “vision,” the goal of zero carbon could not be pursued meaningfully on a long-term basis. He then talked about efforts by the EC. In November 2018, the European Commission (EC) came out with “A Clean Planet for All,” its strategic long-term vision for a climate-neutral economy.

As evidenced in the Paris Agreement, an aggressive scenario will be required to limit the rise in global average temperatures to less than 2 degrees C, and even more so, to less than 1.5 degrees C. One quarter of EU’s seven-year budget (2021-2027) is allocated to decarbonize its economy.

Toward achieving zero carbon, energy production will be focused in Europe. As a medium-term target, greenhouse gas (GHG) emissions will be reduced by 45 percent from the 1990 level by 2030. Given that each EU country has the right to determine its own energy mix, a strong governance system will be required to produce an EU-wide effect.

Garribba said that the EU responded by recognizing the potential of nuclear energy. Conversion to renewable energies and the role of nuclear energy will be important in order to cut GHG emissions by at least 80 percent, or 100 percent.

Currently, 126 nuclear reactors are in operation in fourteen member countries of the EU, and their total generated electricity is 115GW. Nuclear energy accounts for nearly half of the carbon-free electricity in the area.

In the use of nuclear power, the EC asks member countries—in addition to measures to respond to nuclear accidents—to respect the independence of the nuclear safety regulatory commission and the need for transparency in its decision-making in regard to physical protection of radioactive materials, management of nuclear waste, and overall security.

Regulation is different from country to country. In the EU, topical peer reviews on nuclear safety are conducted every six years, focused on evaluating the deterioration of aging reactors. Apart from that, reactor stress tests were conducted in 2013, 2015 and 2017 in the wake of the accident at the Fukushima Daiichi Nuclear Power Plants. The method for checking resistance to external events has been expanded to countries outside the EU, such as Switzerland and Ukraine. Armenia, Belarus and Taiwan are also interested.

As a political matter, nuclear use is understood among the member countries of the EU and is overseen by each state. Each also has a strategy for the operation of sites. Those two facets must work for a consistent result,” Garribba emphasized.

By the 2030’s, most nuclear reactors will have already undergone long-term operation. Unless they are replaced by new nuclear reactors as part of the zero-carbon effort, it will be difficult to achieve the target. Also, given that by 2050, 80 percent of electric power is to be generated by renewable energies, nuclear power in the EU needs both flexibility and load-following operations.

Against that backdrop, the EC is interested in small modular reactors (SMRs), and is providing funds for their development and the strengthening of safety functions. The EC stresses that a system of mutual recognition among multiple countries is required in order to introduce them economically and quickly. In addition, efficiency will be improved in manufacturing and maintenance and inspection by promoting the standardization and commonality of equipment, components and parts. For those mechanisms to function, cooperation between the industry and regulators will be necessary.

At the end of his presentation, Garribba said, “Sustainable technology is essential for a low-carbon economy, eyed for the latter half of the 21st century. In nuclear energy, that means fusion technology.” He then referred to the International Thermonuclear Experimental Reactor (ITER) Project.

With a hope that fusion technology will meet the challenges of both energy and the environment, the ITER project has been carried out as an international collaboration project toward the realization of nuclear fusion energy. Europe and Japan will jointly conduct broader approach (BA) activities in Rokkasho Village, Aomori Prefecture, and Naka City, Ibaraki Prefecture, until the end of 2019.

Included in the specific activities are consideration of conceptual designs and technology for a prototype reactor, the development of a high-performance accelerator (the main component) and implementation of demonstration testing, and the dismantling the JT-60 and replacing it with the Super Advanced JT-60SA.

In June 2019, the G20 Summit will be held in Japan. Hoping that a clear direction toward a zero-carbon society will emerge, Garribba concluded his remarks by saying that the EU wants to “strengthen international partnerships on measures to combat climate change toward achieving the zero-carbon target in 2050.”