At Session 2 of the JAIF Annual Conference, which took place on the second day of the conference, or April 10, a panel discussion was held to discuss the theme of prospects for the development of innovative technology. 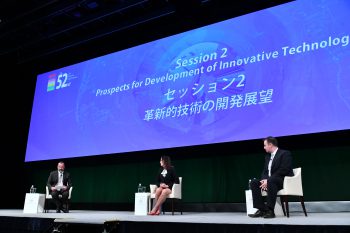 At the start of the session, Paillere made a presentation on the outlook on advanced reactor technologies and their role in future energy markets. In 1996, electricity generated by nuclear power accounted for 17.6 percent of the world’s total electricity. By 2006, though, that figure had fallen to less than 11 percent, and in 2018 was approximately 10 percent. Meanwhile, renewable energies have notably increased. Nevertheless, nuclear energy remains an important power source. 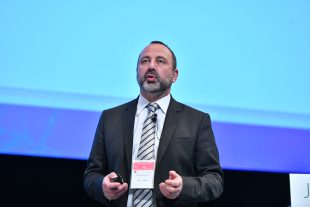 In terms of a future low-carbon power generation regime, the International Energy Agency (IEA) says that the ratio of renewable energies will have to increase toward limiting a temperature rise to less than 2 degree C. Although the share of nuclear energy, which has proven historically to be an efficient technology for reducing CO2 emissions, is also expected to increase to some 16 percent, there is no mechanism to support longer per-unit operation or the construction of new nuclear power plants.

Since the March 2011 accident at the Fukushima Daiichi NPPs, NPP construction around the world has taken two directions: toward large reactors, and toward small ones. As for plans to construct large Generation III or Generation III+ reactors, early efforts suffered from excessive costs and delays. In 2018, however, the world’s first AP1000 and two European Pressurized Water Reactors (EPRs) were completed in China. As for the other direction—namely, that toward small modular reactors (SMRs)—the U.S. Nuclear Regulatory Commission (NRC) is engaged in design certification (DC) for NuScale Power’s SMR. The Generation IV International Forum (GIF) is carrying out an R&D project on six nuclear systems.

For nuclear energy to play its role, based on the IEA’s analyses, it is clear that future systems will have to be flexible, including power plants, power transmission networks and energy storage. Among other topics, the NICE Future Initiative (Nuclear Innovation: Clean Energy Future), another important forum for discussing the characteristics of various clean energies, is addressing how to better enlighten people about the role that nuclear energy can play in an integrated system of clean energies.

As an interim conclusion, not only will large-scale investments be necessary to build new nuclear reactors to put the global nuclear share in the range of 15 to 16 percent, but also steady, thoughtful policy, “good” products from the industry, and support from the public.

Next, Vice President and President-Elect Marilyn Kray of the American Nuclear Society (ANS), who also serves as vice president of strategy and development at Exelon Generation, talked about innovating for a sustainable nuclear future at Session 2. She will become ANS president in June. 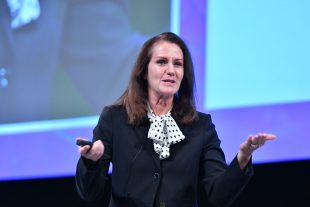 Vice President and President-Elect Marilyn Kray of the American Nuclear Society (ANS), who also serves as vice president of strategy and development at Exelon Generation

According to her, the aims of the U.S. nuclear industry are twofold: (1) to maintain existing NPPs, and (2) to develop light-water-cooled SMRs and commercially use advanced reactors. The United States currently has 98 reactors that produce approximately 20 percent of the nation’s total generated electricity. That represents, moreover, 55 percent of the country’s low-carbon electricity. The average capacity factor of the reactors there is 92.3 percent.

In terms of new reactors, she said, the United States is promoting the commercial use of light-water-cooled SMRs and advanced reactors. To make them available for commercial operation, existing commercial reactors will have to continue to be used. As for efforts to prevent existing reactors from being closed down early, operators in the United States are cooperating domestically toward fulfilling the promise of nuclear energy, and overseas efforts include state- or federal-level support for changes in policy, the realization of competitiveness against other generation methods, and capitalizing on the fact that nuclear power does not emit any CO2.

Nuclear technology, she said, has evolved from original light-water reactors (LWRs) to LWRs with passive safety systems, and on to LWR-design-type SMRs, and more. Hitachi-GE Nuclear Energy Ltd. is developing a 300-MWe reactor based on the economic simplified boiling water reactor (ESBWR) that has already been approved. U.S. Holtec International is currently developing a 160-MWe SMR.

As for activities to promote advanced reactors, she said that the Three Technology Working Group was established to address high-temperature gas-cooled reactors (HTGRs), molten-salt reactors (MSRs), and fast reactors. Regulatory issues include support for a decision on investment, via a phased approach toward permits and licenses and changes to the regulatory framework required for the installation of non-LWRs. Support from the federal government is necessary. It may also be important for progress in financing opportunities and by the Gateway for Accelerated Innovation in Nuclear (GAIN) program, both under the U.S. Department of Energy (DOE).

Next, Science and Technology Director Gareth Headdock of the National Nuclear Laboratory (NNL), UK, gave a presentation at Session 2 entitled “Innovation through Collaboration—A UK Perspective,” in which he talked about progress on that issue in his country. 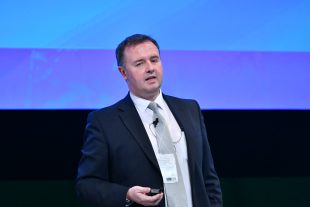 Owned by the British government, NNL operates on a commercial basis, with three roles having been designated for it: (1) acting as strategic technical adviser in the UK, (2) engaging in commercial business, and (3) carrying out national strategic technological efforts. Approximately 60,000 people are now employed at the country’s nuclear facilities, contributing more than 12 billion pounds to the British economy. Electricity generated by nuclear power in Britain comprises 21 percent of the total there. The NPPs, mostly advanced gas cooled reactors (AGRs), are to be gradually closed by 2030. A current issue is how to secure funds for the construction of new plants to replace them.

Technological innovation is being carried out in Britain, he said, with collaboration across fields and across nuclear and non-nuclear industries. Prioritized areas include the development of innovative technology, culture and leadership, cooperation and supply chain, program and risk management, and financing and commercial models.

NNL has also developed models to provide new technological value. Using the latest facilities in cooperation with universities and national organizations, it demonstrates the external value and effects of innovative technologies, including cost reductions and the ability of development to generate funds, by which organizations can be further strengthened.

As a case study, NNL’s Headdock referred to the roadmap for decommissioning research—known as “SHARE”—developed by the European Commission (EC) to improve safety, minimize environmental impact, and reduce costs. Proven technologies, he said, mitigate risks. Additionally, it is becoming difficult for individual countries to justify costs for innovative decommissioning technology. In the near future, he said that SHARE was expected to serve as a roadmap and strategic research agenda (SRA) for its stakeholders, for their joint improvement of safety in the decommissioning of nuclear facilities, reducing costs, and minimizing environmental impacts.

From that, Headdock said that it was clear that cooperation among the industry, academia and the government is advantageous not only toward lowering costs, but expediting commercial use of technology, adding that it was the best way to use facilities, human resources and expertise. Another advantage is that no party has to think about and deal with everything by itself. Mutually learning and adopting good practices from each other is one of the keys to success, he concluded.

The moderator of Session 2, OECD/NEA’s Paillere, then outlined the presentations that were to be given by two men unable to attend the conference. The first was by Petr Zelenov, head of the International Communications and Business Development Department, JSC Science and Innovation, Rosatom State Corporation, and the second by Director Daisuke Matsuno of the Nuclear Energy Policy Planning Division within Japan’s Ministry of Economy, Trade and Industry (METI).

Session 2 then moved to a panel discussion. Regarding the problem of intellectual property rights when engaging in nuclear reactor research through international collaboration, NNL’s Headdock said that “the current direction is to respect rights as much as possible, but, in the case of nuclear energy, it is not good for each party to try to keep things to itself.” Using necessary technology immediately and meeting needs result in lowering costs and securing safety. While there are rights to be protected, he said, the advantages are greater in having the entire sector share intellectual property rather than isolating it.

Referring to the future significance of SMRs, ANS Vice President Kray noted that not all existing large reactors would necessarily disappear. In the United States, she said, large reactors still play an important role as base-load power sources, and larger scale means greater cost effectiveness. The country, she said, would continue using existing reactors on a long-term basis, whereas dispersed energy sources such as SMRs and advanced reactors are more suitable in developing countries where large-scale power sources are not yet needed, as well as in remote places. Each has its own role, she said, and they complement each other. 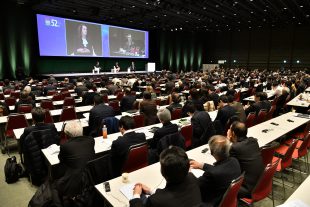 Someone from the floor then posed this question: “The presentations emphasized the importance of carrying out dialogues with regulatory authorities from an early stage of development, but independence on the regulatory side is necessary, too, so what kind of approach can be considered?”

In response, NNL’s Headdock noted that in the case of new reactors making full use of advanced technology, the regulatory side could not make a positive evaluation unless it first understood the technology, no matter how much it wanted to do make such an evaluation. Adding to that, ANS’s Kray, commenting that the U.S. regulatory authority was trying to modernize regulation, said, “Although one goal, for example, is to protect workers, there are different ways to do that. What is necessary is that the regulatory side study and properly recognize where costs are involved and what kinds of reactors are under development, while ensuring established safety standards.”

Finally, asked whether she would pursue the manufacture of SMRs if she were to become president of Exelon, Kray asserted that the basis for judging such matters was ultimately economic efficiency. She said that while SMR design could not yet be described as perfect, LWR-type SMRs could be evaluated more easily. She concluded by saying that if a reactor looked attractive on the company’s balance sheet, it would be built in the end.