Session 3, “Diversity and Possibilities for Nuclear Technology,” held on April 10, the second day of the 52nd JAIF Annual Conference, addressed prospects for the use of radiation with the participation of experts and specialists from various fields. 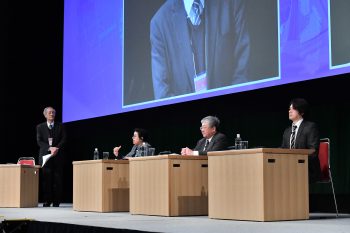 Serving as moderator for the session was Applied Physics Professor Masakazu Washio, a member of Waseda University’s Faculty of Science and Engineering. He also teaches in the same university’s Department of Cooperative Major in Nuclear Energy.

Deputy Director General Najat Mokhtar of the International Atomic Energy Agency (IAEA), who heads the same organization’s Department of Nuclear Sciences and Applications, began her presentation at the session by explaining the significance of nuclear technology’s contributions to human well-being and global development. She then outlined recent technological developments in the uses of radiation in medical care, industry and agriculture. 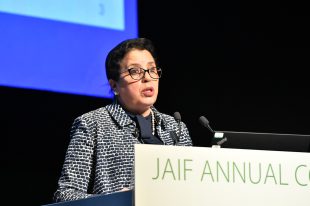 Mokhtar, who had previously given a special presentation in the opening session on April 9, introduced application technologies for using radiation that have produced good results in a broad range of fields, ranging from food security and global environmental protection to archeological studies. She emphasized the need for IAEA to not limit itself to supporting R&D and technological transfers to member countries, but to induce “better impacts” through linkages with other international organizations, including the Food and Agriculture Organization (FOA).

Waseda Professor Washio, based on his long experience in the technological development of accelerators, was next to speak, and first talked about the history of industrial uses of radiation in Japan and future prospects. Electron beams are used to make non-combustive wire coatings that are resistant to heat, so as to manufacture battery diaphragms and desulfurize flue gases, as well as in the areas of energy and environmental protection. Its advantages, he said, were that little energy is used, thus requiring few pollution measures.

He went on to explain, in some detail, the development process for turning a system of electron-beam sterilization for plastic drink bottles (matched to their varying shapes) into a manufactured product. He also mentioned promising examples of megatechnics, including J-PARC, the RI Beam Factory (RIBF), free-electron lasers (FEL), and the International Linear Collider (ILC), saying that he expected them all to be keys to radiation use in the coming era. 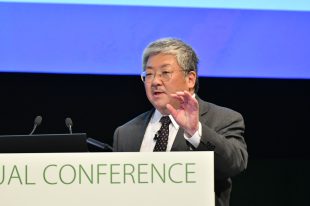 In the area of agriculture, Director Yasuhiko Kobayashi of the Department of Radiation-applied Biology Research at the Takasaki Advanced Radiation Research Institute, part of the National Institutes for Quantum and Radiological Science and Technology (QST), cited examples of useful applications, including improvements to flowers and fruits, and the suppression of potato sprouting.

In the area of medical care, Medical Physics Professor Teiji Nishio from the Graduate School of Medicine of Tokyo Women’s Medical University spoke about intensity-modulated radiation therapy (IT) and proton beam therapy as the “frontline” of radiation therapy, emphasizing their potential in the field of medical physics, which supports those new technologies.

Asked by Professor Washio about future human resource development, Kobayashi referred to textbooks, published under recently revised ministerial teaching guidelines, that introduced examples of various applications of radiation, and then pointed to the necessity of making students think about why radiation is used. 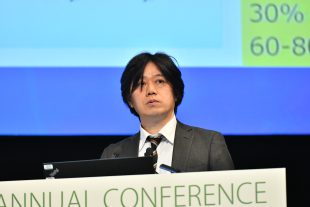 Professor Nishio, meanwhile, pointed to the example of the currently-aired Japanese TV drama called “Radiation House,” which prominently features radiologists. “Children these days know about radiation in medicine through watching TV,” he said.

At the same time, regarding human resources supporting that, IAEA’s Mokhtar pointed out that the presence of medical physicists may not be so well known. 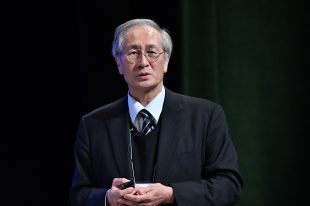 Someone from the floor then asked the panelists about the global prospects for radiation use and its economic effects. Mokhtar referred to large-scale water management facilities in the Sahara and China, citing cases where their use in agriculture increased crop volume by ten to thirty percent. She emphasized the importance of radiation use to developing countries, saying that it could result in increased income and employment.

Professor Washio then noted that two decades have already elapsed since the topic of radiation use had last been taken up at a JAIF annual conference, emphasizing the significance of this session. He concluded by calling for more support for uses of radiation—not just power generation—describing it as an important tool with great potential.