On December 16, the second Hairo Sozo Robocon (Robot Contest) for students at colleges of technology around Japan was staged at the Naraha Remote Technology Development Center in Naraha Town, Fukushima Prefecture. 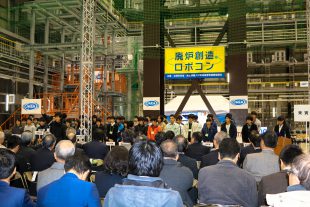 Some three hundred people assembled at the site, including participating students, related parties and the press. Sixteen teams from fifteen schools were selected from among the twenty-five teams that had applied for the contest, each incorporating its original ideas into robots designed to meet the challenges of the event.

As in the first such contest held last year, the robots, operated by remote control in conditions simulating total darkness, could not be seen directly. Radio waves were deemed unable to penetrate an actual facility’s thick concrete walls, and the time limits mimicked the radiation constraints on cameras and semiconductors. 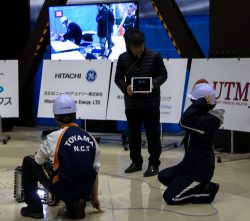 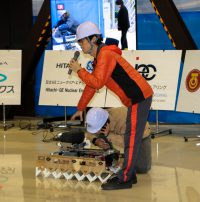 In such severe circumstances, each team chose between two competitive scenarios involving stair climbing or navigating uneven terrain, respectively: (1) on a mockup staircase, the robot had to carry a five-kg load to a second floor, deposit it, and return to the starting point; or (2) on uneven terrain, it had to search for an object left at an unknown location. The judging was based on how well the team performed, as well as on the presentations made by each team the previous day.

At a training camp held last summer, participating teams were given an opportunity to watch videos of last year’s robot contest to develop their strategies. In that contest, no robot could reach the landing on the mockup staircase. This year, on the other hand, three did so, successfully completing their mission. Although no teams reached the end last year on the block-like irregular floor, two did so this year, but without completing the mission.

The MEXT Minister’s Award—the first prize—was presented to the Nara Hairo-Robocon Club of the National Institute of Technology, Nara College (Nara Prefecture), which competed the task using a robot equipped with a crawler (caterpillar tread) and powered by compressed air, as had the same school’s team last year.

The team leader explained the design’s key point by saying, “To ensure stability, we had to properly calculate the balance of the grabber so that the center of gravity remained over the crawler.” His teammate, touching upon the significance of participating in the contest, said, “The robot contest was a good opportunity for us to learn about conditions at the Fukushima Daiichi Nuclear Power Plants.”

The Fukushima Governor’s Award for Excellence went to the mechanical and technology club “Enter” from the National Institute of Technology, Ichinoseki College (Iwate Prefecture), whose entry comprised three units: a drone, a rover and a base robot.

The “NITK-K Robocon Team” of the Kumamoto College of Technology (Kumamoto Prefecture) won the National Institute of Technology’s Chairman’s Prize for Best Idea for its deft, sure-footed robot that moved on six rotating claws in the manner of stalking animal. 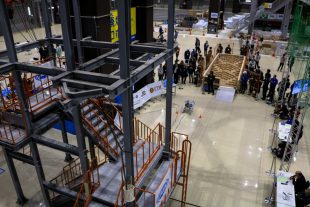 Referring to the third Hairo Sozo robot contest to be held next year, Associate Professor Shigekazu Suzuki, who serves on the robot contest’s executive committee, said the scenarios would be closer to those foreseen in actual decommissioning. He also said that the committee was discussing possible future participation in the contest with teams from overseas, such as the Universiti Teknologi Malaysia, which had observed this year’s contest.