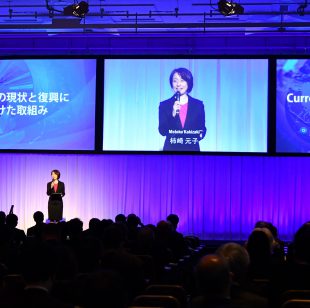 Speaking on the status of the Fukushima Daiichi NPPs and related issues, TEPCO’s Masuda talked about Units 1-4, along with progress in treatment of contaminated groundwater, and the removal of spent fuel and fuel debris. He also explained about cooperation with local communities toward the restoration and reconstruction of Fukushima, and the dissemination of information.

Saying that the working environment had become one in which individuals can work steadily, without fear of injury, Masuda attributed the improvements to the attitudes and efforts of those working there every day, and expressed his gratitude to them. He then showed an eight-minute video of efforts toward decommissioning, while looking back at the time when the reactor accidents occurred. Units 1-4 have been maintained in a cold shutdown state, with treatment of contaminated water progressing. With radiation levels now lower, workers wear surgical masks rather than full-face ones, allowing them to move freely in ordinary work clothing in ninety-five percent of the area. 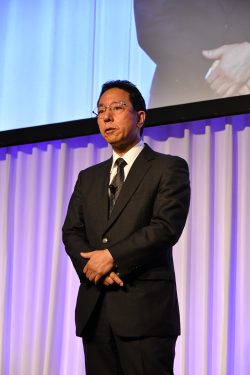 As for removal of the remaining spent fuel, Masuda said it would be done at the other three units based on what had been learned earlier during the removal of all fuel from Unit 4 in December 2014. He said that he expected fuel removal to begin at Unit 3 in the fall. Toward the removal of the fuel debris, the company has conducted a series of investigations of the interiors of the reactor containment vessels to figure out the conditions at each. Radioactive concentrations in the water, have been found to have fallen to levels of 1/100,000th to 1/1,000,000th of those immediately after the accident, and Masuda expressed his hope that that would remain so. As of the end of February 2018, there were 4,970 workers per day—comprising both TEPCO’s and those of cooperating companies—sixty percent of whom were locally hired. The exposure dose was 0.32 millisieverts per month as of January 2018.

Speaking about the activities toward Fukushima Daiichi’s decommissioning, Masuda said that it was important for them to be understood, and that the company must convey the kind of information that people want to receive. In 2017, there were 12,489 visitors to Fukushima Daiichi, fifty-eight percent of whom came from outside the prefecture and twenty-six percent from the prefecture. TEPCO intends to increase the number to 20,000 annually prior to the 2020 Tokyo Olympics.

As part of its activities toward Fukushima’s reconstruction, an action plan was issued to deal with unfounded fears and rumors. As the party responsible for the accident, TEPCO wants to promote the purchasing of Fukushima products even more than now. Masuda concluded his presentation by saying, “We will gather the world’s wisdom and carry out decommissioning together with all of you.”

The giant earthquake of March 11, 2011, along with the subsequent accident at the Fukushima Daiichi NPPs, were major disasters for an area of Japan already suffering more than most from a declining population and aging society. They substantially affected the primary economic sector on which people’s lives were based, because radioactive contamination over a large area required long-term evacuation. Referring to that background, Ozawa emphasized that fifty thousand of the total of 1.85 million people in Fukushima are still evacuees, with the remainder working hard to carry out the reconstruction of the prefecture. 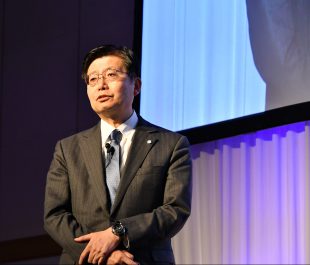 Immediately after the disaster, Fukushima University formed a team to measure radiation, and members of the team visited areas around the prefecture using taxis and other means to gather data. So accurate was the data that they were provided to the local government. Three years ago, the university established the Institute of Environmental Radioactivity (IER) to study and distinguish naturally-occurring environmental radiation from that caused by the 2011 accident. It has also studied movements of radioactivity via water and the effects on ecology. Notwithstanding those efforts, unfounded fears and rumors continue to do considerable harm. At great expense, concentrations of radioactive substances in agricultural products are still measured. Ozawa said that there was a gap between scientific and medical reality, on the one hand, and the sensitivity of people in general, on the other.

Survey results show that women evacuees in Fukushima outnumber men, and that the greatest desire of the more elderly people is to return home immediately. As for the ability of evacuees to integrate into new communities at their evacuation destinations, Ozawa referred to press coverage of children being bullied, and said that it was important for the people already there to get closer to the evacuees and help them establish themselves independently.