At Session 1 of the 51st JAIF Annual Conference, held on April 9, participants discussed energy policy. Given the revisions to Japan’s national Strategic Energy Plan that are now being addressed, the session was divided into three parts corresponding to the “3Es” of energy security, economic efficiency and environmental protection. The participants exchanged opinions intensively on the role of nuclear power and its competitiveness, while also sharing information on global energy circumstances and experiences and perceptions in other countries. 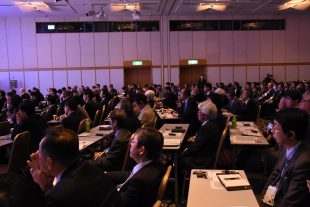 Part 1 was moderated by Chief Economist Tatsuhiko Yoshizaki of the Sojitz Research Institute, Ltd. First to speak was Director Daisuke Matsuno of the Nuclear Energy Policy Planning Division, Ministry of Economy, Trade and Industry (METI), who talked about the history of Japan’s choice of energy based on the two oil crises of the 1970’s, the massive earthquake of March 11, 2011, and so forth, particularly noting the concerns about a reduction in Japan’s level of energy self-sufficiency.

He cited a recent example of the challenges in energy supply and demand. Namely, the capacity reserve margin in TEPCO’s service area fell more than expected earlier this year due to sharp increases of power demand stemming from heavy snowfall and severe cold from late January to early February, so power interchanges from other utility companies were implemented. 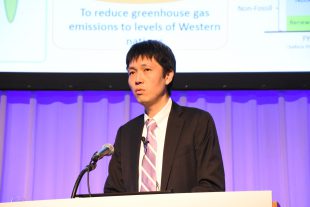 Saying that the ability to supply power had been on the verge of a breakdown at that time, Matsuno sounded an alarm, declaring that “we must never forget the incident.” He further pointed out that the electrification rate is increasing in Japan’s household sector because of the increasing use of OA equipment and home appliances, as well as aging of the population. He questioned the extent to which resources can be continually converted into electric power, reiterating that Japan is poor in natural resources. In the utilization of nuclear power as an “energy of technology,” he emphasized that maintaining human resources and the level of technology itself represented issues to be tackled in the future.

Next to speak was Vice President Esa Hyvärinen of the European Atomic Forum (FORATOM) and a senior vice president at Fortum, a leading clean energy company in Finland. He pointed out the importance of energy security to the EU, where, he said, the industry especially focuses on nuclear power because it provides a good, stable supply of energy. He described the effects of nuclear power as both mitigating global warming and preserving fossil fuels, in addition to its unique safety requirements. 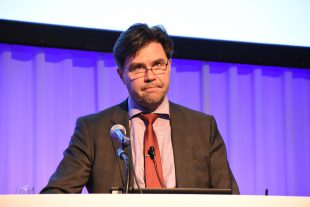 Hyvärinen then suggested a direction for innovation in the future, saying that costs could be reduced by standardization and simpler design. “Being the largest is not necessarily the best,” he said. Nuclear power plants (NPPs) are in operation in fourteen of the EU’s twenty-eight member countries, and account for 27 percent of total electricity generated in the EU. They are major sources of low-carbon electricity, he said.

In response, Yoshizaki emphasized that it was necessary for Japan to maintain as many options as possible by diversifying its energy sources and its energy mix. From the viewpoint of geopolitical risk, he noted that Japan now depends on the Middle East for its fossil fuels. He said Japan’s level of energy security must be strengthened, for which it will have to foster nuclear power, among other things.

Regarding the energy situation in Europe, METI’s Matsuno said that there were many options available there, with quite diverse energy sources across a broad range. He pointed out the differences between Europe and Japan, saying that Japan would have to work through technology, indicating prospects in future energy policy. 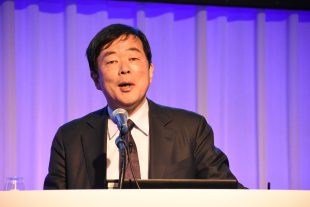 In response to that, Hyvärinen said that Japan had several promising technological possibilities, adding that he especially thought companies would be driven to innovate by consumers making their wishes known though the market. As for Japan’s having been the site of the Fukushima Daiichi accident, Hyvärinen called nuclear power “global” when it comes to risk. He said that regarding matters of safety, cost, standardization and the like, “Very close cooperation is essential, whereby competitiveness will increase.”

In the subsequent Q&A session with the floor, Hyvärinen was asked for “advice from Finland,” as its selection of a radioactive waste repository is ahead of efforts elsewhere. Based on the experience of having candidate sites in multiple municipalities, he emphasized that offering total transparency was “the only way to obtain local confidence.”

Part 2 of the Session 1 dealt with the topic of economic efficiency. Three experts each gave presentations and then took part in a panel discussion on how to maintain a certain level of nuclear power amidst power market deregulation. 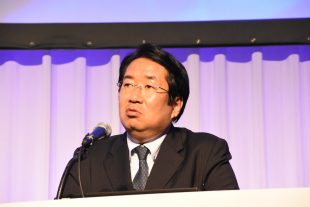 Serving as moderator was Shinichi Ichikawa, chief market strategist at Credit Suisse, who said that various power sources—thermal, hydro, renewables, nuclear—were often talked about simply in terms of generating costs. But in a resource-poor country like Japan, he said, the true economic efficiency (cost and value) of an electric power source should include another factor: namely, the ability to provide a stable supply of energy, including during emergencies.

He then urged that economic efficiency be considered from the following viewpoints: (1) global warming risk, (2) potential costs in a resource-poor country, and (3) the regressive nature of energy prices. He also said that the use of fossil fuels should be cut as much as possible, in any case. In addition, he stressed that Japan’s own energy sources should be secured, and that suppliers should be diversified, with consideration given not only to industrial competitiveness but also to the burden on low-income households when deciding the energy mix. 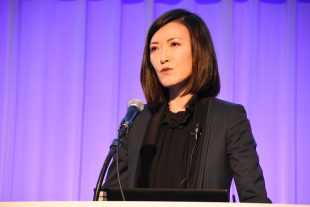 Next, Noriko Endo, project professor at the Graduate School of Media and Governance at Keio University, pointed out that generating costs for each power source, for which the government has done trial calculations, reflect not only fuel costs, but also carbon pricing, feed-in-tariffs (FIT) and the political costs of responding to nuclear accident risks.

She then expressed her view that, in an age when great quantities of electricity are consumed and energy security risks are increasing, and when artificial intelligence (AI) and the Internet of Things (IoT) are increasingly relied, there is no doubt about the economic efficiency of maintaining nuclear power, which is a quasi-domestic power source with a high energy conversion rate, despite the generating costs, which greatly change depending on the system.

CEO Edward Kee of the Nuclear Economics Consulting Group (NECG) was next to speak in Part 2. He started his presentation by stating, “The abundant experience of the United States with nuclear power, in the face of electricity market deregulation, is ‘bad’ experience.” He said that nuclear power in the United States faced financial problems in deregulated areas, and it might not be able coexist with the market.

Kee then said that there were three causes for that failure in the United States, as follows: (1) the approach of the market to electric power, (2) low market prices for electric power, and (3) no compensation for the “public interest” aspects of nuclear power. In order to solve the problem, he said that efforts by states to secure more financial resources had to be considered, along with “re-regulation” or withdrawal from the power market, as well as the role of the federal government. 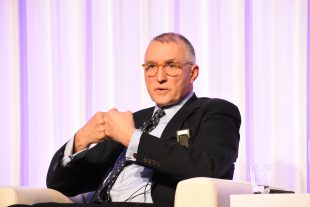 In the panel discussion that followed, Kee—mentioning that nuclear power was doing quite well in China where private ownership is limited—questioned whether the realities of nuclear power could match market principles. Ichikawa responded that the political involvement of the government was important, but that it was a problem in the aspects of prices and technology.

Responding to those comments, Endo said that when it comes to shifting to public ownership, people have talked about what the national government can do and whether it might involve a moral hazard. On the other hand, when thinking about the private sector going on “as is,” the negative possibilities are greater. She said that government involvement was necessary when considering who could survive for a hundred years as the main implementing body for the nuclear business. She then suggested creating a specific mechanism whereby power utilities could work together on the ordinary decommissioning of nuclear power plants (NPPs).

Based on what was discussed, Ichikawa made a summary of the comments, saying that all had agreed that the economic efficiency of nuclear power had to be considered from several points of view. He also said that the current government was passive, despite various methodologies being discussed, such as shifting to public ownership. People’s distrust in nuclear power is because the government does not show a clear policy, he concluded.

In Part 3 of the session, treating the theme of climate change, participants discussed the nature of the kind of clear policy needed for nuclear power to play its key role in a low-carbon society. 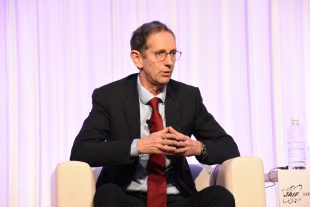 Peter Fraser, head of the Gas, Coal and Power Markets Division at the International Energy Agency (IEA), warned that it was important to ensure as many energy options as possible, including nuclear power, and that giving up nuclear power would make it harder to realize a low-carbon society.

Showing that global CO2 emissions were increasing and that most of them originated from the power sector, Fraser said that efforts to lower CO2 emissions could not be enough. He then emphasized that in order to realize a low-carbon society in the future, improvements were required in efficiency, renewable energies, nuclear power and carbon capture and storage (CCS). He said that the power supply had entered a new phase with cheaper clean energy technologies, including solar, wind and storage batteries. But in areas where nuclear power is less used, it has become difficult to realize low-carbon, he added. As a successful example of low-carbon power generation, Fraser presented the case of Ontario in Canada, where coal-fired power plants had been closed through reinvestment in nuclear power, natural gas and renewable energies. 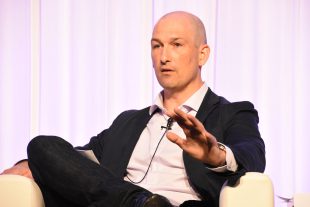 Ben Heard, founder and executive director of Bright New World, noted that local forces sometimes wield great strength in the politics of nuclear power, and that it was necessary to strive to obtain understanding by showing examples of successes and failures in other countries, and having discussions strategically.

We have to think first, he said, about the kind of future we want in terms of the environment. From there, he added, we can figure out the roles technology will play. Heard expressed his view that because of air pollution, massive destruction of nature, and other factors, thermal power using fossil fuels was a more serous threat to human health, inasmuch as per-capita energy consumption increases as the economy grows, in comparison with nuclear power, the dangers of which can be controlled through responsible management,. He stressed that nuclear power was a magnificent technology, in that great quantities of energy can be obtained from small pellets—a relationship well matched to the vision of clean energy and environmental protection. 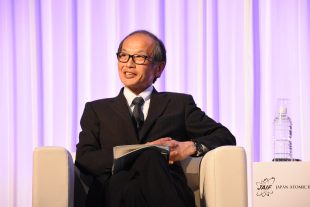 Next to speak was Professor Jun Arima of the Graduate School of Public Policy at the University of Tokyo, who served as moderator. He asserted that in order for Japan to achieve its promise of reducing greenhouse gas emissions, the use of renewable energies and the restarting of nuclear power plants were both essential. Further, he pointed out that when one looks beyond 2050, the replacement of older plants must be considered.

Toward such a future, he noted that Japan would have to develop policies, regulations and a business environment for nuclear power, for which the government is asked to present a clear political course of action. Furthermore, when talking about the importance of national dialogue, Arima emphasized that realistic discussions had to be carried out on energy policy in particular, without just sticking to the results of public surveys.