On April 10, the second day of the JAIF Annual Conference, a presentation was given by Managing Executive Officer Akira Ono of Tokyo Electric Power Co., and president of the Fukushima Daiichi Decontamination and Decommissioning Engineering Company (FDEC), concerning the current state and challenges at the Fukushima Daiichi Nuclear Power Plants. 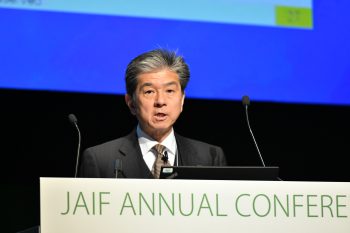 He began by reporting on the lifting on the very same day of several evacuation orders in Okuma Town in Fukushima Prefecture. Already eight years have passed since the accident at the NPPs, and the environment both within and surrounding it has improved substantially. Work at the site is being carried out strategically and on schedule. The company is endeavoring to reduce risks and improve interactive communications, advancing the decommissioning process safely, steadily and without delays.

In the presentation itself, TEPCO’s Ono discussed six topics, accompanied by the showing of various graphics illustrating the following items: the current state of Fukushima Daiichi, the improved working environment there, measures to deal with contaminated water, the removal of fuel from spent fuel pools, preparation for fuel debris removal, and interactive communications with the public and the world at large.

First, talking about the current state of the NPPs, he said, “All the units are in a state of cold shutdown. The volumes of water injections have gradually decreased, and the temperatures of the pressure vessels and the interior of the containment vessels have remained stable.” Spent fuel has already been completely removed at Unit 4. At Units 1 through 3, meanwhile, internal investigations are progressing using remotely-controlled robots in advance of fuel debris removal, an important step toward the entire plant’s decommissioning.

As for the working environment at Fukushima Daiichi, workers at the site right after the accident had to wear radiation protection suits and whole-face masks in all areas. Now, thanks to measures to prevent the diffusion of radioactive materials, green zones have been expanded to 96 percent of the premises, in which the workers can work while just wearing ordinary clothes. The number of workers has also decreased to an average of 4,000 per day on weekdays, down from some 7,000 after the accident occurred. The exposure dose of the workers, which had averaged 21.59 mSv monthly in March 2011, including the time during the immediate responses to the accident, is now only 0.3 mSv monthly. In all respects, then, the safety at the site has substantially improved.

Another issue is the fact that the purification facility cannot remove tritium—a natural component in water—from the contaminated water. Japan’s Ministry of Economy, Trade and Industry (METI) has established a task force on tritium water measures, a subcommittee of which has been looking at the handling of water processed by the Advanced Liquid Processing System (ALPS).

The subcommittee has evaluated such matters as monitoring, technological aspects, disposal periods, and costs, so as to ensure regulation and safety for five different disposal methods, namely, geosphere injection, offshore release, vapor release, hydrogen release, and underground burial. Given the various societal effects of disposing the water processed by ALPS, such as the generation of unfounded fears and rumors, explanatory meetings and public hearings were held in Fukushima and Tokyo in August of last year. Discussions on the topic are ongoing.

Also evaluated by the subcommittee was the risk that contaminated water could flow out from the facility were a tsunami to be triggered by an earthquake along the Kuril–Kamchatka Trench, considered a practically imminent probability based on history, as well as the fact that four centuries have already passed since a giant quake last occurred. One plan is to construct seawalls rising eleven meters above sea level so that decommissioning work will not be delayed.

The next topic was how much spent fuel had been removed from the spent fuel pools of each unit. All fuel was removed from Unit 4 in December 2014, and preparations are underway at Units 1 through 3. At Unit 1, the challenge is to remove piles of rubble. Unit 2 is at the stage of remotely-controlled removal operations being considered. At Unit 3, the fuel removal is scheduled to begin this month, with a target for completion during FY20 (April 2020 to March 2021). Although there is no risk of collapse, the demolition of the upper part of the exhaust stack for Units 1 and 2 will start in mid-May in order to reduce risks.

Before the fuel debris is removed, meanwhile, internal investigations of the reactor containment vessels will be scheduled for the first half of the current fiscal year (April to September 2019) at Unit 1, and in the second half (October 2019 to March 2020) at Unit 2. The sediment will also be sampled.

Regarding interactive communications, the state of decommissioning is being conveyed through participation in the International Forum on the Decommissioning of the Fukushima Daiichi NPPs and the Prefectural Citizens’ Conference to Ensure Decommissioning Safety. TEPCO also conducts tours of the NPPs, with around 19,000 people joining them in the previous fiscal year (April 2018 to March 2019). The company hopes that that number will rise to 20,000 by the time of next year’s Tokyo 2020 Olympics.

To facilitate and improve information dissemination online, the company maintains a portal site dealing with the topic of processed water, in which users can enjoy a virtual tour of the decommissioning site. Also, in November 2018, the TEPCO Decommissioning Archive was opened in Tomioka Town, at which the activities toward decommissioning are described in a meaningful chronology. Already some 14,000 people have visited the archive.

In conclusion, Ono said that the decommissioning of the Fukushima Daiichi NPPs would take some three to four decades, and that his company would carry it out both safely and steadily. Eight years after the accident at the plant, fuel is progressively being removed from the spent fuel pools, allowing for a better grasp of the conditions of the fuel debris therein. Decommissioning is also progressing according to schedule.