The 54th JAIF Annual Conference was held on April 13 and 14 under the theme, “Japan and the World under the COVID-19 Pandemic—Environmental and Energy Issues & Nuclear Power.” The conference was the first to be held in two years—the one in 2020 having been canceled at the outset of the coronavirus pandemic—with 830 participants from Japan and abroad. Because of the ongoing pandemic, the conference took place online. 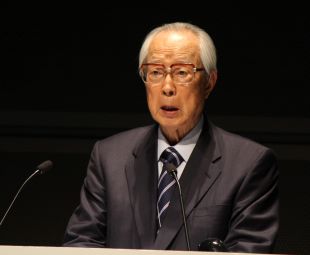 The conference this time focused on some of the key issues faced by countries around the world, such as changing global and economic conditions, climate change and energy (including the use of nuclear power), and the effects of the COVID-19 pandemic.

It also addressed the ideal nature of Japanese policies on energy and nuclear businesses in the context of the Sixth Strategic Energy Plan, concerning which the government has begun discussions. Additionally, it took the opportunity to look at the current state of decommissioning at the Fukushima Daiichi Nuclear Power Plants, and to view the reconstruction of Fukushima a decade after the nuclear accident of March 2011.

JAIF Chairman Takashi Imai delivered the opening remarks to the conference. With March 11 marking a full decade since a massive earthquake struck eastern Japan in 2011, causing the subsequent accident at Fukushima Daiichi NPPs, owned by the Tokyo Electric Power Co. (TEPCO), he extended anew his sincere sympathy to the people affected by the disaster, including those who are still evacuees. He also expressed his respect and gratitude to the people working toward the restoration of Fukushima.

Regarding energy and nuclear power policy, Chairman Imai referred to the goal of carbon neutrality by 2050 declared by Prime Minister Yoshihide Suga last fall. Citing data from the International Energy Agency (IEA) that “Japan has avoided approximately 4.6 billion tons of CO2 emissions so far thanks to nuclear power, and that without nuclear power, CO2 emissions in the domestic power generation sector would have increased by at least 25 percent,” he said that nuclear power must continue to be used for the goal of carbon neutrality by 2050 to be achieved.

Given Japan’s extremely low self-sufficiency in energy, Chairman Imai stressed the importance of nuclear power, calling it “a robust, environmentally sustainable, and quite reliable power source.” The Japanese nuclear industry, he said, must also promote the restarting of existing reactors and the extension of operating lifetimes, while endeavoring continually to further improve safety. That would be the way, he stressed, by which it could regain confidence across society.

Chairman Imai then noted that building new reactors and replacing older ones must be clearly positioned within national energy policy in order to sustain nuclear power into the future. He added that steady efforts must also be made toward the early establishment of the nuclear fuel cycle and the disposal of high-level radioactive waste (HLW).

Referring to the theme of the conference, the chairman said, “COVID-19 has compounded challenges already faced by the world, including those of the economy, climate change, and energy. In such circumstances, the path forward for the nuclear industry—both Japan’s and the world’s—will not be smooth or level.”

He concluded by expressing his hope that this year’s conference, by drawing on the best available examples, would be an opportunity for all participants to address the future, particularly “what we want and how we can get there.” 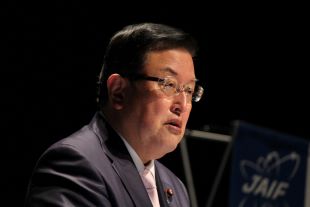 Next to speak at the conference were State Minister Yasumasa Nagasaka of the Ministry of Economy, Trade and Industry (METI) and Chairman Mitsuru Uesaka of the Japan Atomic Energy Commission (JAEC), both of whom delivered their greetings.

METI’s Nagasaka began by describing the decommissioning process now occurring at the Fukushima Daiichi NPPs, as well as policies on natural resources and energy as related to the reconstruction and revitalization of Fukushima. He urged the domestic nuclear industry to actively promote activities toward nuclear innovation, adding his hope that it would contribute to maintaining and strengthening human resources and technology.

In a video message, meanwhile, JAEC Chairman Uesaka discussed recent developments in nuclear policy, and introduced various recent technological innovations. The latter ranged from so-called “infra-engineering medical” to the maintenance and management of bridges using portable X-ray sources, as well as theranostics (i.e., therapeutics + diagnostics) using radiopharmaceuticals made from uranium slag. All of those underscored the breadth of prospective applications for nuclear science and technology in the future. 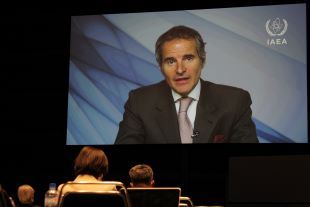 The special session that came next featured a video message from Rafael Mariano Grossi, director general of the International Atomic Energy Agency (IAEA). In it, he looked back at the past year, particularly the COVID-19 pandemic, and noted that global issues have recently become much more complex. He suggested that applications of nuclear technology could provide a multiplier effect and contribute to solutions in many areas, including food security and environmental protection.

With a decade having elapsed since the nuclear accident at the Fukushima Daiichi NPPs, IAEA’s Grossi emphasized that his Agency would continue to support Japan and endeavor to improve nuclear safety around the world, based on the lessons learned from the accident. He then clearly stated that nuclear power was “a proven technology for decarbonization.”

Director General Grossi ended his remarks by saying the IAEA was preparing to release the following message in advance of COP26 in Glasgow in November 2021: “When it comes to climate change, nuclear power is essential.” 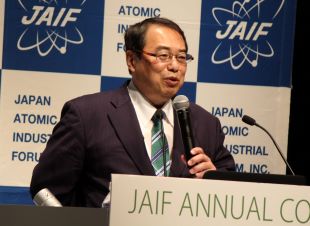 After that, Japanese historian and writer Kouzou Kaku delivered a presentation, followed by the showing of a video-interview with John J. Hamre, president and CEO of the Center for Strategic and International Studies (CSIS) based in Washington, D.C.

Referring to Tokugawa Ieyasu (1543-1616), the founding shogun of Japan’s long-ruling Tokugawa shogunate in 1603, Kaku pointed out the gaps between the actual personality of the military commander during Japan’s Sengoku Period (circa 1467 to the end of the 1500’s) and the various depictions of him in novels and dramas. He turned that into an example of the importance of having a questioning attitude when considering history, including being skeptical, not jumping to conclusions, and valuing numbers.

Kaku expressed concern for the problems of unfounded assumptions and irresponsible, emotionally charged arguments. He challenged the current tendency to regard nuclear power as “transitory,” partially blaming the domestic nuclear industry for not pushing back when others described it in that way. Unless the industry became more assertive—by properly expressing those things that it needed to say—the historian said in conclusion that it would be impossible for it to foster new human resources.

Finally, in his video, President Hamre talked about the handling of COVID-19 in the United States, along with the new diplomatic and environmental policies introduced since the inauguration of President Joe Biden in January 2021. He then offered advice on the restoration of trust in nuclear power, and more.