On September 17, the 62nd General Conference of the International Atomic Energy Agency (IAEA) opened in Vienna for a five-day period of speeches and other events. 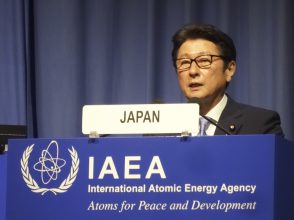 In a video message watched by the attendees, Director General Yukiya Amano emphasized the Agency’s responsibilities in nuclear nonproliferation, as well as its support for member countries in using nuclear energy for their development and growth.

In his speech at the conference as the representative of the Japanese government, Masaji Matsuyama, Minister of State for Science and Technology Policy, talked about the North Korean nuclear issue. He said that Japan supported the reaffirmation of that country’s intention towards complete denuclearization—made at the June summit in Singapore held between United States President Donald Trump and Chairman Kim Jong Un—as a step towards the comprehensive resolution of outstanding issues regarding that country.

Japan calls for the international community to cooperate, Matsuyama said, in enabling the IAEA to play a central role in realizing North Korea’s denuclearization, making full use of its expertise and experience. 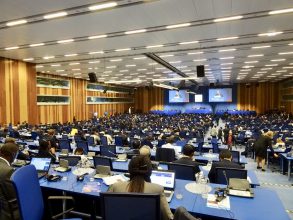 The minister then described Japan’s nuclear policy, explaining that the country, based on its revised Strategic Energy Plan, was working to achieve an optimal energy mix by 2030, while restarting nuclear power plants, prioritizing safety. Looking ahead to 2050, he said that Japan would pursue the development of reactors with enhanced safety.

Matsuyama also noted that the Japan Atomic Energy Commission had recently revised the country’s basic principles on utilizing plutonium for the first time in fifteen years. Saying that Japan would keep on abiding by the principle of not possessing plutonium without a specific purpose, he stressed that the country’s policy was to reduce its plutonium holdings, so that no issues existed concerning nuclear nonproliferation.