On February 20, the Strategic Policy Committee under the Advisory Committee for Natural Resources and Energy heard presentations made by the Japan Business Federation (Keidanren) and three other organizations. Their input will contribute to deliberations on revisions to Japan’s Strategic Energy Plan. The committee is chaired by Masahiro Sakane, councilor of Komatsu Ltd. 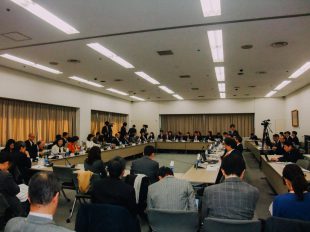 At the meeting, representatives from Keidanren explained its “Proposals on Future Energy Policy,” which it released last autumn, urging the government to ramp up its efforts to realize, by 2030, the national composition of power sources (the so-called “energy mix”) that had been announced three years ago. That targeted energy mix consists of nuclear power at 20 to 22 percent, renewable energies at 22 to 24 percent, and thermal power at 56 percent.

Keidanren also urged the government to pursue an overall energy policy balancing the “S + 3Es,” that is, the conventional “three E’s” of energy security, economy, and the environment, plus safety. All of that, it said, stemmed from the basic stance that energy issues are important political issues lying at the foundation of people’s lives and national business activities.

Next, representatives from the Japan Chamber of Commerce and Industry similarly explained its “Opinions on Revision to the Strategic Energy Plan,” a document also released last fall, which described the government’s efforts toward 2030 energy policy in terms of five points, as follows:

Regarding the realization of the energy mix, it said that the operation of the country’s nuclear power plants (NPPs) should be resumed as soon as possible, while addressing whether construction of new NPPs and replacements for older ones should be begun.

It then spoke to the adverse effects of rising power costs on businesses, referring to the Kawaguchi Shingo Industrial Park, where energy-intensive industries are concentrated. Pointing out that power rates are still higher than before the 2011 disaster, it asked for a fundamental review of renewable energy feed-in-tariffs (FIT).

On the use of nuclear power, meanwhile, representatives attending the meeting from the Japanese Trade Union Confederation (JTUC-RENGO) said that the government should promote a policy whereby nuclear power would be used until alternative energy sources are ensured.

They also said that dependency on nuclear power should be reduced over the medium and long range, eventually to the point where society does not depend on it anymore. From a worker’s viewpoint, it urged the government to take steps to alleviate the adverse effects of economic and societal changes resulting from shifting to a low-carbon society on employment.

Last of the invited organizations to speak at the meeting were representatives from the National Liaison Committee of Consumers’ Organizations, who called for the following points in revising the Strategic Energy Plan:

As for nuclear power specifically, it said that consumers would “never forget Fukushima,” emphasizing their anxiety about such matters as nuclear accidents, waste disposal, and costs.

In response, the committee members urged consideration of such issues as safe, small nuclear reactors as dispersed power sources, as well as discussions of each energy source based on the level of safety to be sought. .

Looking back on presentations by German experts on global warming and energy policies that were made the previous day, the strategic policy committee chairman Sakane said, “In Germany, they can give electric power to neighboring countries and receive it from them. Japan is an island nation. Listening to their comments, I felt there were great differences between us and them concerning restrictions and conditions.” He then suggested the necessity of revitalizing technological development for the sake of increasing the use of natural energy.