On November 10, the removal was completed of all eighteen panels covering the outer walls of the reactor building at Unit 1 of the Fukushima Daiichi Nuclear Power Plants, owned by the Tokyo Electric Power Co. (TEPCO). The work was carried out in preparation for the removal of nuclear fuel from the spent fuel pool at the unit. It began on September 13, with the final panel removed in the morning of November 10. 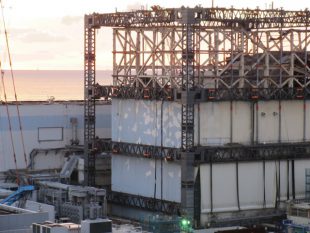 Throughout the period, no significant changes were recognized in concentrations of radioactive materials, either by dust monitors or at monitoring posts at the boundaries of the NPPs.

The six panels covering the roof of the building had been removed from July to October 2015, in preparation for the removal of the spent fuel from Unit 1. In August and September of this year, dust-suppressing agents were sprayed to prevent radioactive materials from scattering from the side, and removal of the wall panels began on September 13.

According to the medium-term and long-term roadmap toward the decommissioning of Units 1 to 4 of the Fukushima Daiichi, revised in June 2015, once the building cover of Unit 1 is dismantled, it will take two years for debris to be removed from the upper part of the operating floor and for a fuel-removal cover and fuel-handling machine to be installed. The fuel removal is slated to begin around the end of fiscal 2020 (ending March 2021).

TEPCO is currently proceeding with an investigation on the state of debris beneath the collapsed roof, at the same time it removes the wall panels, and in anticipation of the removal of the debris. A camera and dust-sampling device—both hung from a crane at the upper part of the reactor building—are recording conditions and gathering data on the concentration of radioactive materials in the air.

Meanwhile, turning attention to measures to deal with contaminated water at the site, the Agency for Natural Resources & Energy (ANRE) under the Ministry of Economy, Trade and Industry (METI) convened an expert panel on November 11. The panel focused on the water—now stored in tanks—being treated by the Advanced Liquid Processing System (ALPS), comprising equipment for multi-nuclide removal.

As the contaminated water successfully treated by ALPS still contains tritium, a report was drawn up in June on a technological evaluation of disposal methods for it. In response, the ANRE panel will comprehensively consider how to handle the water, based on the technological information in the report. It will also consider the issue from a societal point of view, including the problem of unfounded fears and rumors.

TEPCO has released materials showing that the volume of contaminated water treated by ALPS reached about 690,000 cubic meters as of October. There are concerns about the risk of storing such a huge amount of water for even longer, possibly hindering decommissioning activities.

The report compiled in June technologically evaluated five methods for dealing with the tritium-bearing water, namely, injection into a stratum, release into the sea, steam discharge, hydrogen discharge and land burial.

Because the increasing number of tanks threatens decommissioning work at Fukushima Daiichi, the Nuclear Regulation Authority (NRA) of Japan has asked TEPCO to explain its intentions on the matter as soon as possible. NRA Chairman Shunichi Tanaka has expressed his view that it should be released into the sea, but local fisheries object to that plan on the grounds that it would generate unfounded fears and rumors.

For more details on contaminated water at Fukushima Daiichi, including the tritium issue, see the following video (released in December 2013):