On January 10, Commissioner Satoshi Kusakabe of the Agency for Natural Resources & Energy (ANRE), under Japan's Ministry of Economy, Trade and Industry (METI), visited Governor Ryuichi Yoneyama of Niigata Prefecture to ask him for understanding on restarting the Kashiwazaki Kariwa-6 and -7 Nuclear Power Plants (ABWRs, 1,356MWe each), owned by the Tokyo Electric Power Co. (TEPCO), in Niigata Prefecture. (Photo provided by Niigata Prefecture.) 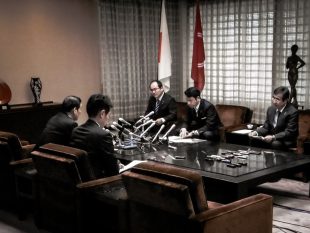 During his visit, the commissioner delivered a document in the name of METI Minister Hiroshige Seko clearly stating that the national government would promote the restart of the two units according to its official Strategic Energy Plan. In response, the governor said that his prefecture would pursue its own verification of the cause of the Fukushima Daiichi accident, as well as the effects of nuclear accidents on the human body and daily living, and the adequacy of evacuation plans in the event of a nuclear accident. He asked for the government’s cooperation in providing information for the verification efforts and in developing evacuation plans.

The document delivered to the governor also noted public concerns about restarting NPPs in the wake of the Fukushima accident. At the same time, it pointed out international recognition of global warming issues and the increasing importance of nuclear power as a non-fossil energy source.

Meanwhile, the national government has asked for understanding on the restart of the two Kashiwazaki Kariwa units, saying that the biggest challenge in implementing nuclear policy is to restore public confidence in nuclear energy. It also says that it will stand at the fore of that effort and do its utmost. To that end, the government will thoroughly explain such matters as the results of the regulatory examinations as well as its energy and nuclear policies and its measures concerning nuclear emergency preparedness. It will also continue to support and assist with local nuclear emergency plans, including evacuation plans.

As for the Kashiwazaki Kariwa-6 and -7 NPPs, conclusions were issued on December 27, 2017, confirming the compatibility of both units with the new regulatory standards after examinations by the Japanese Nuclear Regulation Authority (NRA) over the course of some four years, making them the first boiling water reactors (BWRs) so approved.

Following that, TEPCO released comments in which it reiterated that it would continue endeavoring to improve nuclear safety and ensure the reliability of the reactors. It also said that it would carry out locally-oriented management and do its utmost to respond to the Niigata Prefecture on the three issues that it wants to verify.

For his part, Governor Yoneyama has demonstrated a cautious attitude toward restarting nuclear reactors that have been shut down, and has said he would not discuss them unless the three issues are fully verified.