On July 28, the Agency for Natural Resources & Energy (ANRE), under Japan's Ministry of Economy, Trade and Industry (METI), released the so-called "map of scientific characteristics," color-coded to show the scientific suitability of each region in the country for geological disposal of high-level radioactive waste (HLW).

This is a new process in line with “activities with the national government at the fore,” expressed in the basic policy on final disposal that was revised in 2015.

Specifically, the government has identified regions with particular scientific suitability, submitting requests to the relevant municipalities for their understanding and cooperation with investigations, together with efforts to obtain that understanding. The agency’s geological disposal technology working group has been working on the matter.

At an inter-ministerial council meeting held on the same day, the map’s release was approved after municipalities were contacted in advance. At a press conference after that meeting, METI Minister Hiroshige Seko said that release of the map was “a major step toward realizing final disposal, but also only the first step on a long road, and efforts from now on will be increasingly important.” He then expressed his intention to engage in thorough dialogues across the country.

In the map, anywhere with unfavorable conditions or circumstances for geological disposal are classified as “areas with presumed unfavorable characteristics.” Those include areas that are near active faults or volcanoes, as well as those which are subject to broad uplift or subsidence (indicating long-term instability deep underground). They also include areas with oil, gas or coal deposits (as they may be potential drilling sites in the future), and are colored orange and silver, respectively.

In contrast, areas without particularly unfavorable conditions or circumstances are classified as “areas possessing relatively high potential for favorable characteristics” and are colored light green. Those include areas close to coastlines deemed especially favorable in terms of waste transportation, which are colored dark green.

In comments released upon the release of the map, Chairman Satoru Katsuno of the Federation of Electric Power Companies (FEPC) said that he expected more people nationwide to become more interested in geological environments, geological disposal mechanisms and the like, and would “come to have a better understanding of the matter.” He added that the FEPC, representing parties generating HLW, would actively provide information in an easily understood manner, and conduct dialogues with local communities.

Meanwhile, Chairman Sadayuki Sakakibara of the Japan Business Federation (Keidanren) also released comments concerning the issue. Saying said that nuclear power involves very important issues for any country making use of it, he stated, “In Japan, as elsewhere, the generation enjoying its benefits should meet the challenges.”

Currently, HLW (vitrified products) is temporarily stored at the Rokkasho reprocessing facilities in Aomori Prefecture. The governor of that prefecture, Shingo Mimura, released a comment saying that the national government “should, with solemn determination, come to the fore and speed up efforts to improve the public’s understanding” toward the early selection of a final disposal site, 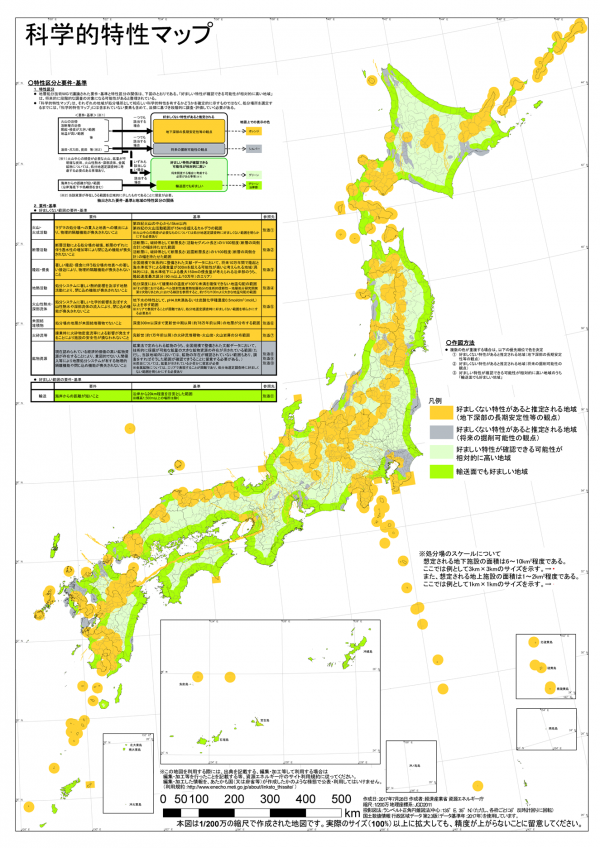 The Map of Scientific Characteristics was distributed by ANRE as a non-editable PDF file, and is attached to this article in its original form. However, the fact that it is only in Japanese may make it difficult to comprehend!