ANRE Reports on the Future of the Reprocessing Business in Japan, Including the Creation of a New Business Entity

On January 12, Japan’s Agency for Natural Resources and Energy (ANRE) reported to the Japan Atomic Energy Commission (JAEC) about fuel reprocessing in the new business environment resulting from increased competition stemming from the country’s full deregulation of the power retail market starting in April 2016, among other developments. 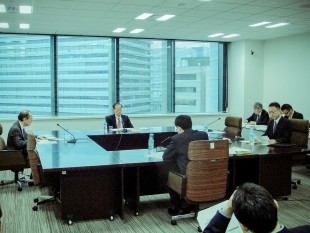 A special working group was established in July 2015 under the Advisory Committee for Natural Resources and Energy to deal with how to improve Japan’s nuclear business in the new environment resulting from the power system reform, especially considering its effects on a reprocessing business that could be mutually supported by nuclear operators.

Another factor changing the environment is the new national policy to “reduce dependence on nuclear power as much as possible,” as stated in the Strategic Energy Plan. It will also be necessary for steps to be taken to secure stable funding for the spent fuel reprocessing business, and properly implement it, so that it will not stagnate in the future.

The working group discussed such matters at five meetings through November 2015, and later compiled the results into an interim report. The report clarified the responsibilities and roles of the three parties involved, namely, nuclear operators, a new juridical body and the national government. It added that a “duly authorized juridical entity” (once established, only dissolvable by legislative act) would bear primary responsibility for the spent fuel reprocessing business.

The report also said that the previous “deposit system” would be changed to a “contribution system,” wherein all nuclear operators would be required to contribute all the necessary funds for reprocessing and the like to the new juridical entity. In terms of actual reprocessing activities, it may be possible to commission Japan Nuclear Fuel Ltd. (JNFL) to carry them out, as it has accumulated the necessary technology and human resources, as well as the facilities and equipment.

Responding to the report, JAEC Chairman Yoshiaki Oka, speaking personally, said that given that lack of progress in restarting Japan’s nuclear power plants (NPPs), and that the Rokkasho Reprocessing Plant is not yet ready for operation, there is still time to consider issues of the nuclear fuel cycle. He also said that JAEC would view the matter over medium-range and long-range perspectives, taking into consideration such matters as the plutonium balance.