On July 11, a ceremony was held at the University of Tokyo to mark the opening of the 2016 term of the Nuclear Energy Management School, a joint creation of Japan and the International Atomic Energy Agency (IAEA). The purpose of the school is to foster young leaders in all countries and to build professional and human resource networks. Director Tomotsugu Sawai of the Japan Atomic Energy Agency's Human Resource Development Center presided at the event. 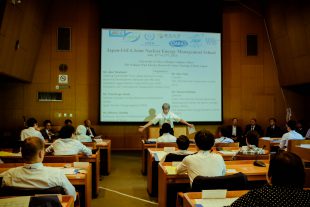 In his welcome speech at the start of the ceremony, JAIF President Akio Takahashi—who also serves as president of the JAIF International Cooperation Center (JICC) and as chairman of the operations committee of the Japan Nuclear Human Resource Development Network (JN-HRD Net)—said that nuclear energy is still expected to play an important role in the future, both in Japan and globally. His message to the students was: “Please utilize the knowledge that you obtain and the connections that you make at the school back in your own countries.”

The other speakers, who spoke on such subjects as the importance of preserving the lessons learned from the March 2011 accident at the Fukushima Daiichi Nuclear Power Plants, included the following persons:

The school, with the ongoing cooperation of the IAEA, has been operated under a Japanese initiative since 2014. It is sponsored by the Japan Nuclear Human Resource Development Network (JN-HRD Net), the Department of Nuclear Engineering and Management of the University of Tokyo, the Japan Atomic Energy Agency (JAEA), JAIF, JICC and the Wakasa Wan Energy Research Center.

From July 11 through 27, the students will attend lectures and group discussions on various nuclear-related subjects, including energy strategy, nuclear nonproliferation, international law, economics, human resource development and environmental protection. In addition, they will go on technical tours of such places as the Kobe Shipyard of Mitsubishi Heavy Industries (MHI) and the Ohi NPPs of the Kansai Electric Power Co. (Kansai EP) and Tsuruga Offsite Center of Fukui Prefecture.

Following the opening ceremony, Mitsuru Uesaka, professor at the University of Tokyo and chairman of the executive committee of the school, highlighted the importance for the participants of visiting actual sites. Those include the Ohi NPPs, where preparations are underway for the reactors to restart. He emphasized the opportunities available to the students to deepen their understanding on activities to ensure regional safety.