As reported previously, the Strategic Policy Committee under Japan’s Advisory Committee for Natural Resources and Energy issued a draft of a revised Strategic Energy Plan at a meeting on May 16. The draft will be revised further after comments from the public. The final version is expected to be approved by the Cabinet this summer as the next Strategic Energy Plan, some four years after the current one was issued. 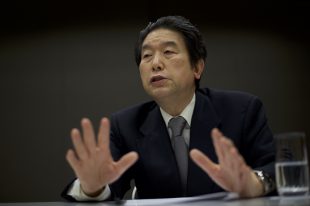 At a meeting of the committee last August, Hiroshige Seko, Minister of Economy, Trade and Industry, remarked that this was “not the stage at which to change the skeleton of the plan.” In line with those comments, the draft emphasizes the “firm implementation” of an energy mix for Japan by 2030 based on the current plan issued in 2014, and includes the development of a long-term scenario toward 2050 reflecting global warming issues and more.

In the strategic plan toward 2030, nuclear power is positioned as “an important base-load power source contributing to the stability of the long-term energy supply-and-demand structure,” emphasizing the addition of the phrase “long-term.” In mapping out a 2050 scenario among options for the practical stage of realizing a low-carbon society, Japan will immediately strive to strengthen its human-resource, technological and industrial infrastructure, along with creating reactors boasting superior safety, economy and mobility, and proceeding with the development of technology to resolve back-end issues.

At a meeting on May 16, the committee chairman, Komatsu Ltd. Councilor Masahiro Sakane—who also participated also in the Round Table for Studying Energy Situations (addressing energy strategies to 2050)—asserted that Japan would have to “expedite development of small module reactors (SMRs),” deemed to have both a convenient size and high safety.

Given the inevitable uncertainties when attempting to look more than three decades ahead, the committee members expressed various thoughts on such matters as the creation of a scientific review mechanism to flexibly modify and determine development targets for energy options and degrees of relative importance, as well as proper activities to enhance understanding. Some of their opinions are summarized below.

Professor Takeo Kikkawa of the Graduate School of Innovation Studies, Tokyo University of Science: “If the only thing done was to extend the operating lifetimes of existing NPPs to 60 years, the scale of nuclear power would quickly diminish. Nuclear power cannot remain an option for realizing a low-carbon society without also replacing aged NPPs. That would not conflict with discussions on reducing dependency on nuclear power.”

Executive Officer Teiko Kudo of Sumitomo Mitsui Banking Corporation: “Given that energy issues require long-term investment, it is necessary to work on them promptly and continually. To improve technological self-sufficiency, we need comprehensive public-private efforts, including investments in research and development.”

General Manager Yoko Takeda of the Research Center for Policy and Economy at the Mitsubishi Research Institute (MRI): “How we respond to the speed of changes in global situations is important, and annual follow-ups will be necessary.”

Board Member Kikuko Tatsumi of the Nippon Association of Consumer Specialists: “The draft just contains words, and does not look inviting. It is neither interesting nor easy to read. To get as many people as possible to want to read and appreciate the draft, I feel that there should be some sort of “entry way” to the communication, such as illustrations or clear charts.”

Advisor Hiroya Masuda to the Nomura Research Institute (NRI): “A firm mechanism will have to be worked out for a ‘scientific review mechanism’ to work properly, based on objective information.”

Managing Executive Officer Nobuko Mizumoto of IHI Corporation: “By 2050, most of us here will already be retired. It is necessary to strengthen education to convey to the children the importance of energy issues.”

Professor Akira Yamaguchi of the Graduate School of the University of Tokyo: “Technological innovation and regulation are closely connected. Siting issues are very important, and not limited to nuclear power.”