On November 2, Japan’s Prime Minister Fumio Kishida attended the World Leaders Summit, a summit-level meeting at COP26 in Glasgow, Scotland. There, he announced that Japan was ready to make an additional contribution of up to USD10 billion over five years to support decarbonization in Asia. 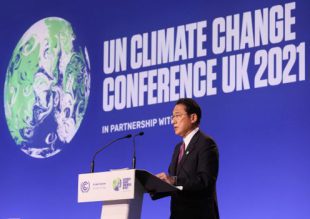 The additional contribution relates to the Copenhagen Accord from COP15 in 2009, in which developed countries agreed to a goal of mobilizing jointly to raise—publicly and privately—USD100 billion per year by the year 2020 to address the needs of developing countries.

According to the OECD, the amount raised in 2019 was only USD79.6 billion, and, although no data has been released, achieving the goal by 2020 appears to be difficult. Taking the initiative in compensating for the shortfall, Japan announced that it would make an additional contribution of up to USD10 billion over the coming five years.

That amount is in addition to the USD60-billion pledge of over five years in public and private assistance that Japan had announced earlier at the G7 summit meeting in June, as well as in addition to its contribution—in cooperation with the Asian Development Bank—in starting a framework of innovative financial assistance for decarbonization in Asia and elsewhere.