On May 14, the All Japan Council of Local Governments with Atomic Power Stations, chaired by Mayor Takanobu Fuchigami of Tsuruga City, convened a general assembly in Tokyo to discuss the organization’s business plan and budget for FY18 (April 2018 to March 2019). 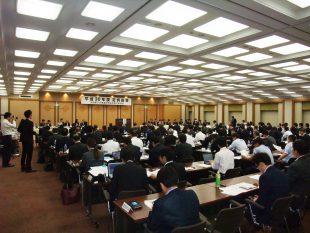 Established in 1968 to ensure the safety of local residents and achieve regional development, the council will mark its 50th anniversary this year. This time, the assembly approved the change in status for Mutsu City and Rokkasho Village in Aomori Prefecture (sites of a nuclear facility) from associate to regular membership.

The municipal heads and government officials present at the assembly then discussed a written request concerning matters in the business plan involving the national government and related organizations covering nuclear power. The first item in the request dealt with the reconstruction of areas affected by the 2011 earthquake in northern Japan. It also strongly urged the government to accelerate efforts on back-end issues related to decommissioning.

In relation to national energy policy, the request called upon the government—now that discussions on the Strategic Energy Plan have entered their final stage—to take responsibility for clearly presenting to siting areas how nuclear policy will be carried out in constructing a sustainable energy supply-and-demand structure, given those areas’ cooperation with the policy so far.

At the general assembly, Mayor Hiroshi Nakatsuka of Ohi Town (Fukui Prefecture)—the site of the Ohi Nuclear Power Plants, owned and operated by the Kansai Electric Power Co. (Kansai EP)—talked about circumstances in his region, where some NPPs are being decommissioned while others are being restarted. He then called upon the government to flexibly operate the program for local subsidies, and to develop the proper infrastructure to overcome disasters and facilitate evacuation.

Next to speak was Mayor Yutaka Nose of Takahama Town (also in Fukui Prefecture), who said that discussions on revisions to the Strategic Energy Plan have not been persuasive. They should be more realistic, he said, not based on “blue-sky” thinking (that is, thinking not grounded in reality).

In response, Director-General Yoshifumi Murase of the Electric and Gas Industry Department, Agency for Natural Resources & Energy (ANRE), under the Ministry of Economy, Trade and Industry (METI), said, “No nuclear policy can succeed without the siting areas.” He said the government would “respond sincerely to the opinions expressed today,” and would discuss issues from a “solid, well-grounded stance.”

Murase also promised that the government would boost activities to enhance the understanding about energy in consuming regions and by the mass media.

Also voicing his opinion at the assembly was Deputy Mayor Hiroyasu Hagitani of Tokai Village (Ibaraki Prefecture), who aired concerns as to whether orderly evacuations could be carried out in emergencies in densely populated areas around NPPs. He also spoke of the need to eliminate nuclear power’s negative image so as to ensure adequate human resources for the future.

Finally, representatives from the Cabinet Office responsible for nuclear emergency preparedness and from the Ministry of Education, Culture, Sports, Science and Technology (MEXT) explained nuclear disaster preparedness and responses, as well as activities being carried out to develop infrastructure for research and ensure human resources.