On April 24, Japan’s Mitsubishi Heavy Industries, (MHI) and the International Research Institute for Decommissioning (IRID), based in Tokyo, showed members of the press a version of a robot arm that they had developed to remove fuel debris from the Fukushima Daiichi Nuclear Power Plants, damaged by a tsunami in March 2011. 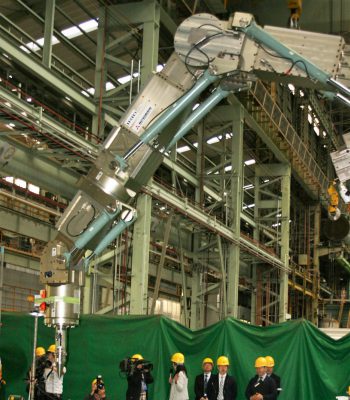 Previous AIJ article on the issue:

According to the so-called mid-and-long-term roadmap toward the eventual decommissioning of the Fukushima Daiichi NPPs, the fuel debris is to be removed in an uncovered state from the side of the reactor containment vessel (CV). To that end, MHI and IRID carried out validation tests three months ago, in February, in which they inserted a robot arm, used to process and hold the fuel debris, into the pedestal (at the bottom of the reactor pressure vessel) via an access rail on the side of the CV.

“Before now, individual efforts toward the removal of the fuel debris had proceeded separately. Thanks to the large device, though, the efficiency of those effort should be improved,” explained Senior Manager Naoaki Okuzumi of IRID’s R&D Strategy Planning Department.

Investigations are being carried out of the interiors of each unit’s CVs toward the start of the removal of the fuel debris in 2021. According to an MHI engineer working on the robot arm, “As the technology is still in its fledgling state, we have to improve and perfect it before introducing it at the site.”

For example, the robot arm, measuring only some 6cm in diameter, was designed to bear a load of two tons at the tip, although the precise nature of the fuel debris has not been clarified. Things yet to be determined include the robot arm’s specifications, the specific functions of the tools to be installed, and its resistance to radiation.