At the 60th General Conference of the International Atomic Energy Agency (IAEA)—held from September 26 to 30 in Vienna, Austria—about 720 visitors visited the Japanese booth that was operated jointly by public and private organizations, seeing for themselves the current state of Japan's nuclear R&D. They included representatives of governments, specialists and experts in nuclear, scientific and technological fields, and IAEA people from many countries. 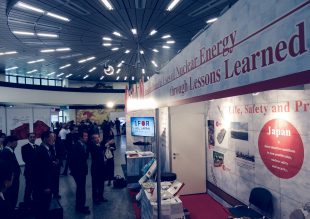 The exhibitions at the booth were organized by the Japan Atomic Industrial Forum (JAIF), the Cabinet Office, and other governmental organizations, along with such companies as Toshiba Corporation, Hitachi-GE Nuclear Energy Ltd., Mitsubishi Heavy Industries (MHI), Tokyo Electric Power Co. (TEPCO), and such institutions as the National Institute for Quantum and Radiological Science and Technology (QST), and the Japan Atomic Energy Agency (JAEA) 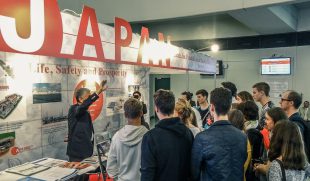 Under the theme of “Life, Safety and Prosperity—Quests for Peaceful Uses of Nuclear Energy through Lessons Learned,” explanations were made of Japan’s pursuit of peaceful uses of nuclear power for the welfare, safety and prosperity of the people, based on the lessons learned from the accident at the tsunami-struck Fukushima Daiichi Nuclear Power Plants.

Models, photographs and other images were used to demonstrate the state of progress at the Fukushima Daiichi NPPs, R&D on technology for light water reactors (LWRs) and next-generation reactors, and other technology involving radiation applications. Particular emphasis was put on Japan’s basic position on diverse nuclear development and uses, and its commitment to the principles of nuclear nonproliferation and improved safety. 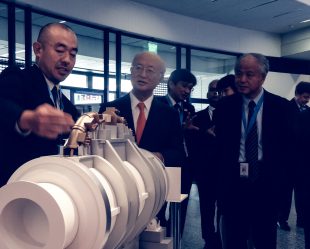 Among the displays at the booth, a model of the superconducting rotating gantry for heavy-ion therapy that QST installed this year drew considerable attention, especially on the part of people from developing countries.

Also paying a visit to the booth were IAEA Director General Yukiya Amano and Japanese representative Hirotaka Ishihara, state minister of the Cabinet Office. They appreciated the theme and listened to explanations given at each exhibit.