Each year, the Japan Atomic Industrial Forum, Inc. (JAIF) presents a survey titled “World Nuclear Power Plants.” This year's survey is compiled from data as of January 1, 2020 based on replies to questionnaires sent to electric power companies and nuclear-related organizations around the world. 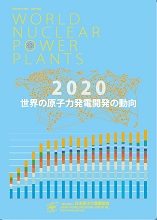 As of January 1, 2020, there were 437 operating nuclear power plants (NPPs) around the world, with a total generating capacity of 411,924 MW. Total nuclear capacity, which had been increasing since 2013, decreased for the first time in six years.

Six had outputs less than 1,000 MW (total generating capacity of 4,300 MW) and had been operated for more than 40 years (since the 1970s): two in the U.S. and one each in South Korea, Sweden, Switzerland and Taiwan. The other six closed units totaling 6,430 MW of generating capacity had begun commercial operations in the 1980s and been operated less than 40 years: five in Japan and one in Germany. 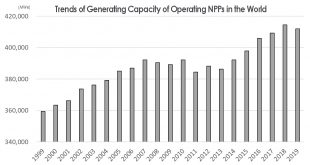 In the U.S., where electric power markets are significantly deregulated in many states, effective utilization of power generation assets is being pursued via extensions of NPP lifetimes and power uprates, rather than construction of new, large-scale NPPs requiring large-scale initial investments. The average capacity factor for all 96 NPPs in the U.S. in 2019 was a record high 93.4%.  Thus, although the number of NPPs in the U.S. went down, electricity generated by nuclear marked new highs for two consecutive years, 2018 and 2019.

On December 19, 2019, the world’s first floating nuclear power plant, Akademik Lomonosov, was connected to the grid in Pevek, the northernmost town in Russia.  Proactive efforts toward commercialization of SMRs are being carried out in many countries, most notably in the U.S., the U.K. and Canada.

The survey this time found that five NPPs, with a total generating capacity of 6,667 MW, had started commercial operation in three countries: three in China and one each in South Korea and Russia. In addition, the Embalse (PHWR, 656 MW) in Argentina, operation of which had been suspended, was restarted. In contrast, closures were seen of 12 NPPs (operating through the previous year) in Japan, Germany, South Korea, Sweden, Switzerland,

Construction Launched of 5 NPPs; 59 Units under Construction Globally, with Generating Capacity of 63,127 MW

Construction projects are expected for 82 NPPs, representing 93,166 MW. In 2019, eight NPPs (9,605 MW) were newly identified in two countries as being planned, while four (5,182 MW) were moved from the category of planning to “under construction.”  In addition, projects in three countries for six NPPs (4,764 MW) were canceled. Accordingly, the results of this survey reflect a net two fewer NPPs, and less capacity by 261 MW, under planning than the previous year.