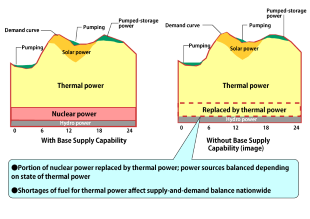 No major effects were seen at nuclear power plants (NPPs) in the region where the greatest shaking was experienced. At the Fukushima Daiichi Nuclear Power plants, no abnormalities were note in any major facilities, including the nuclear reactor water injection facility and the spent fuel pool cooling facility. Although multiple thermal power plants stopped due to the earthquake, those with insignificant damage were restarted one by one, and, consequently, there were no major effects on the power supply.

On February 22, TEPCO representatives gave an explanation, at a meeting of the Nuclear Regulation Authority (NRA), of the effects of the earthquake on the Fukushima Daiichi NPS. Based on collated reports from patrols following the earthquake, it was confirmed that water levels in the reactor containment vessels of Units 1 and 3 had been declining through February 19, but no significant changes were seen in the temperatures at the bottom of the pressure vessels or in radiation levels at monitoring posts located along the boundary of the Fukushima Daiichi NPS. TEPCO therefore concluded that no external effects existed.

Power supply and demand in Japan had been tight from late December through early January, with the arrival of a cold wave seen only once every several years. All power companies did their best to ensure supply capabilities, by procuring additional fuel and putting all available power plants, including aged thermal power plants normally out of service, into full operation. They also successfully accommodated demand for electricity in broad areas where the situation was most pressing, eventually securing an adequate supply.

Since late January, temperatures in Japan have been higher than normal on many days, helping to stabilize supply and demand, and storage of LNG for power generation at each power company has returned to the level necessary for stable supply. Additionally, in terms of supply of electricity, the Ohi-4 NPP (PWR,  1180MWe), owned and operated by the Kansai Electric Power Co. (Kansai EP), resumed generation on January 17.

On February 17, at a meeting of the Advisory Committee for Natural Resources and Energy, FEPC identified the following five issues in dealing with pressures on power supply during this period:

— Insufficient assumptions and assessments of supply and demand (kWh), i.e., not taking risks into consideration.

— A shortage of base supply capability.

— The delay in grasping the nationwide fuel shortage.

— The time required for adjustments when interchanging power among areas suffering supply and demand gaps.

— The time required to address and adjust to requests for power conservation.