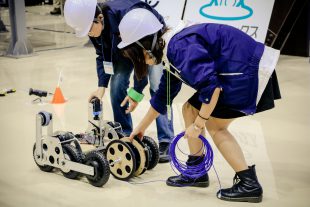 The competition—its name roughly translating as “creativity contest using robots for decommissioning”—was intended to get students interested in the decommissioning process by challenging them to identify and resolve issues and to develop robots accordingly. 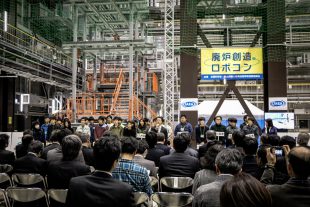 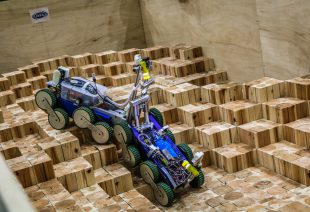 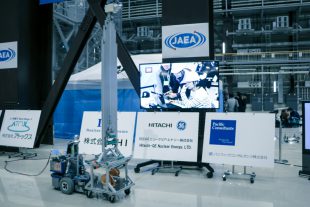 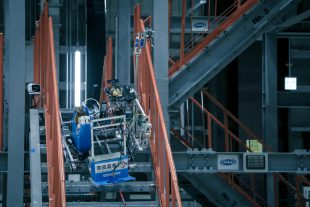 Teams consisted of up to three students and a supervisor. Each team chose between two competitive challenges: either stair climbing or navigating uneven terrain. On a mockup staircase, the robot had to carry a 5-kg load to a second floor, deposit it, return to the starting point, and search for an object left at an unknown location on the second floor. On the block-like irregular floor, the robot had to investigate the configuration, including surface conditions and sizes of obstacles, and locate a target item. 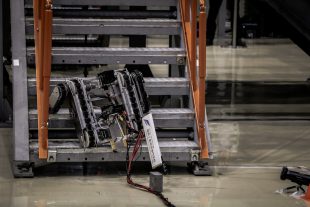 Simulating conditions in a dark reactor building at the Fukushima Daiichi Nuclear Power Plants, the robots, operated by remote control, were viewed using cameras and monitors as they were unable to be seen directly. Radio waves were deemed unable to penetrate thick concrete walls, and time limits mimicked the radiation constraints on camera and semiconductor functioning.

Judges could, however, extend the time limits if a team demonstrated a creative solution. Each team made a ten-minute presentation in the morning to explain the environment and conditions they had set, and later conducted its ten-minute demonstration in the afternoon. Presentations and demonstrations were evaluated from the viewpoints of the ability to identify issues and resolve them, as well as creativity, ideas, and technical execution. 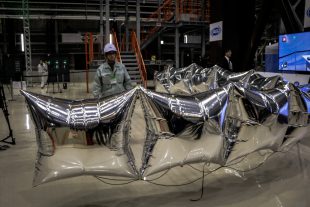 The participants made wide variety of types of creative robots in a variety of shapes. One made use of helium-gas balloons, while another had an extendable arm to grasp the stair railing. Only a few, however, could accomplish their tasks. One team made a flying drone but could not control it well, and it crashed.

Another “robocon” will be held on the same subject next year. After taking a hard look at their results this time, the participants all seem eager to take up the challenge again.