On July 28, the Tokyo Electric Power Co. (TEPCO) released its evaluation of the results of an examination of fuel debris in Unit 2 at the Fukushima Daiichi Nuclear Power Plants, carried out using cosmic-ray muon measurement technology. Most of the spent fuel debris—fuel that had melted in the accident and resolidified—appears to be at the bottom of the reactor pressure vessel (RPV) of Unit 2. 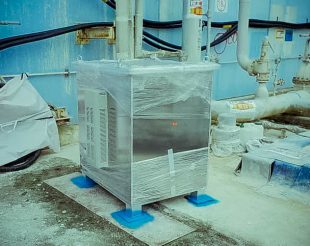 TEPCO conducted the examination in a joint project with the High Energy Accelerator Research Organization (abbreviated KEK, after the Japanese “Kō-enerugii Kasoku-ki Kenkyū Kikō”). Two panels (plastic scintillators) that have been installed inside the measurement device (see photo)—itself about one cubic meter in size—detect the scattering of muon particles.

The distribution of materials is calculated based on muon transmittance. The effectiveness of the method had already been established in studies that took place at Unit 1. At Unit 2, the examination took place from March to July 2016 to identify the shadows of high-density materials believed to be fuel debris at the bottom of the RPV.

Despite some uncertainties in the range of a few tens of tons, some 20 to 50 tons remain in Unit 2’s reactor core (inside the shroud), based on calculations of the amount of materials at the bottom. That compares with about 160 tons of fuel assemblies and about 15 tons of control rods in the core before the accident.

Also, about 160 tons remains at the bottom of Unit 2’s RPV, in contrast to 35 tons before the accident. That indicates that most of the fuel debris has collected at the bottom of the RPV. According to the national medium-range to long-term roadmap toward decommissioning, TEPCO will decide on a method of removal of fuel debris during the first half of fiscal 2018 (April to September 2018).

On July 28, TEPCO also released its “Management Plan for Sustainable Business,” in light of changes in the business environment. According to that, the power company will try to build a system integrating all national resources to carry out the decommissioning of Fukushima Daiichi NPPs steadily. Cooperation will be particularly strengthened with the Japan Atomic Power Company (JAPC), among other organizations.