On November 25, Governor Issei Nishikawa of Fukui Prefecture, which hosts the prototype fast breeder reactor (FBR) known as Monju, met with the respective ministers of the Ministry of Education, Culture, Sports, Science and Technology (MEXT) and the Ministry of Economy, Trade and Industry (METI) at MEXT offices in Tokyo. 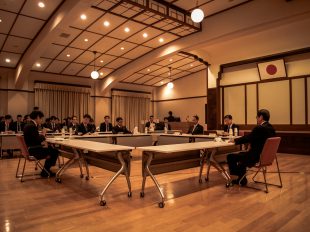 The purpose of the meeting was to exchange views on the national government’s fundamental review of Monju, including its possible decommissioning, as well as on future fast reactor development policy.

At the meeting, MEXT Minister Hirokazu Matsuno began with an explanation of the circumstances surrounding Monju. In November 2015, he said, his ministry began looking for another body to replace the Japan Atomic Energy Agency (JAEA), having received a recommendation from the Nuclear Regulation Authority (NRA) of Japan to do so, because of that agency’s insufficient maintenance and management capabilities.

He noted also that it would take eight years to restart the reactor, owing to the need to respond to new nuclear regulations, and that it would cost an estimated total of about JPY540 billion (USD4.82 billion at USD1=JPY112) until the end of its operation.

At the same time, the minister clearly stated that Japan “needs” the human resources and research foundation already accumulated in Fukui Prefecture, given the national government’s basic policy to continue promoting the nuclear fuel cycle.

Next, METI Minister Hiroshige Seko discussed the possibility of developing a demonstration reactor, based on the state of deliberations at the Conference on Fast Reactor Development, begun in October, which brings together the public and private sectors.

He said that the prospect of a demo reactor would depend on how well the technology and knowledge accumulated at Monju and the experimental reactor Joyo so far could be utilized in the future.

At the meeting with Governor Nishikawa, both ministers also emphasized their support for the Energy R&D Centralization Plan that Fukui Prefecture has been working on, aiming at building a central energy R&D facility with a focus on nuclear technology.

For his part, the governor noted that although the nuclear fuel cycle was “important” in Japan’s energy policy, recent announcements about national policy on Monju–namely, its fundamental review, including the possibility of decommissioning–meant that the siting area, which has been supportive of national policy, could be “sacrificed, suddenly left high and dry.”

Governor Nishikawa went on to ask the government to discuss the issue sufficiently and explain things responsibly. He further requested clarification of the government’s direction in establishing an operating body for Monju, as well as for promotion of the Energy R&D Centralization Plan. He also wanted a presentation of specific measures as soon as possible so that research results accumulated at Monju to date could be optimally utilized.

The future fate of Monju and the national policy on fast reactor development are both expected to be decided at a ministerial meeting on nuclear energy with relevant Cabinet members before the year finishes, taking local opinions such as the governor’s into account.