At a regular press conference on April 23, Governor Masao Uchibori of Fukushima Prefecture announced that 210 tons of agricultural products produced in Fukushima were exported in fiscal year 2017, the largest volume since FY05, when the prefecture began compiling those statistics. 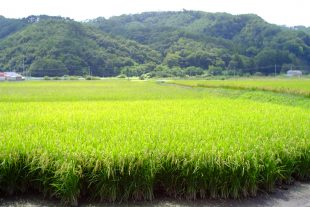 In FY10, exports totaled 153 tons, but fell to almost zero after the March 11, 2011 earthquake because of unfounded fears and rumors concerning foods from the affected areas. Thereafter, active sales promotion efforts, including those by the governor himself, produced a steady recovery.

A deal concluded with Malaysia for the purchase of one hundred tons of rice accounted for half of Fukushima’s agricultural exports this time. New markets for fruits, primarily in Southeast Asia, developed rapidly. For example, the export volume of pears to Vietnam is now 11.5 tons. Last summer, Governor Uchibori visited Malaysia and Vietnam seeking to expand exports of peaches, pears and rice, and increase the number of chartered flights to Fukushima Airport. He also asked those countries to help combat local biases against the prefecture.

At the press conference, Governor Uchibori said that safety measures for agricultural products from the prefecture had been highly evaluated, and that quality and good taste were both well recognized. Those, he said, resulted in yet another high for exports. At the same time, he frankly acknowledged the current situation, saying that fear and misinformation concerning the prefecture’s products persist. He expressed his determination to further expand Fukushima’s export markets by highlighting quality, taste and safety to more countries.

At the end of March this year, the national Ministry of Agriculture, Forestry and Fisheries released for the first time the results of a survey on the distribution of Fukushima agricultural products in FY17, highlighting efforts by producers to increase exports.

For example, rice produced in Inawashiro Town was exhibited at food fairs in Europe and the Middle East, promoted as “sushi rice,” as the individual grains retain their shape even when the rice is chilled. As a result, so-called “ultimate sushi rice” is now sold as “high-quality Japanese rice” in the United Arab Emirates (UAE).