Since October 1, the Fukushima Joban Products Fair has been making people in the Tokyo-Yokohama metropolitan area more aware of the tasty and appealing marine products produced in Fukushima Prefecture. The fair is sponsored by the prefecture as one of the several Fukushima Restoration and Revitalization Projects supported by the Ministry of Agriculture, Forestry and Fisheries. 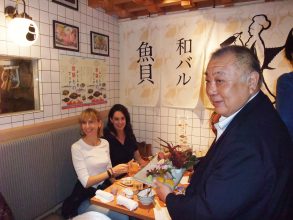 In the fair, some twenty-five participating restaurants in Tokyo and Yokohama have created original dishes using fish and shellfish sent directly from the prefecture to boost consumer recognition of regional brands, known as Joban-mono in Japanese, and cultivate new sales channels.

According to data released in September by the Fisheries Agency, fishing ports in Fukushima that had been damaged by the massive March 2011 earthquake were able to restore their full unloading capabilities as early as 2017. Even so, the current quantity of products being handled by the Onahama Fish Market in Fukushima is only less than half of what it was the year before the earthquake happened, and their monetary value has fallen 39 percent. Efforts are still needed to not only restart fisheries operations and reinvigorate the marine products processing industry in the prefecture, but also to dispel unfounded fears and rumors and develop new markets.

On October 1, an opening ceremony was held at Sancha Mare (Setagaya Ward, Tokyo), one of the twenty-five eateries participating in the fair. In his greeting on behalf of the sponsor, Director Takuji Mizuno of the Fukushima Fisheries Office, speaking in front of an array of dishes using Joban products, including flounder, surf clams and gurnard, which had just been carried in from the kitchen, said, “Good, tasty fish are caught in the waters off Fukushima Prefecture, where the Oyashio Current, rich in nutrients, meets the warm Kuroshio Current.” 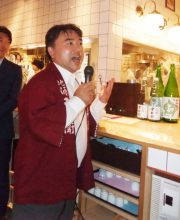 He emphasized the enthusiasm of fisheries-related people in Fukushima for restarting operations, and asked visitors to the restaurant to enjoy the fish and shellfish dishes made from ingredients coming from Fukushima, not just that day, but thereafter as well.

After the Fukushima Joban Products Fair ends on October 15, a second fair will be held at the same restaurants from November 1 through November 15.