This autumn, awareness-raising activities will be launched by a subcommittee of a council, comprising relevant Japanese ministries, agencies and local municipalities, set up to realize the Fukushima International Research Industry City Vision (also referred to as the "Innovation Coast Vision"), aiming at creating industries within the Hamadori region of Fukushima Prefecture. 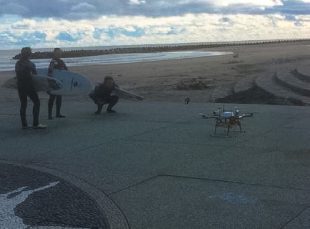 On August 6, the Fukushima Restoration and Revitalization Council—consisting of representatives of the Japanese government, Fukushima Prefecture, municipalities in the prefecture, and local organizations—decided to establish a subcommittee to promote the Innovation Coast Vision. A report entitled “Fukushima Innovation Coast Vision” was issued in June 2014, since when progress has been made on various projects focusing on decommissioning and robotics.

A system will now be created by which the ministries and agencies, along with local communities, can work closely together through the subcommittee, to be co-chaired by a state minister for reconstruction, a state minister of economy, trade and industry (part of the Ministry of Economy, Trade and Industry, or METI), and the Fukushima prefectural governor.

The vision’s promotion is clearly stated in the recently revised Act on Special Measures for the Reconstruction and Revitalization of Fukushima. An inter-ministerial council, convened at the prime minister’s residence at the end of last month, decided on the future course of action. That will include implementing policies that are based on such things as “on-site practicality” and “local community input,” with the determination to actively meet every need for realizing the vision.

According to a February 2017 report submitted to METI’s Innovation Cost Vision Council, remarkable progress has been made toward the commercialization of several of the current projects in robotics, decommissioning, international industry-university cooperation, the environment and recycling, and energy, as well as the agriculture, forestry and fisheries industries.

In robotics, for example, demo tests for making long-distance deliveries using fully-autonomous drones succeeded in January at the Fukushima Hamadori Robot Testing Zone, based in Minamisoma City, for the first time anywhere in the world. With that success, further innovations can be expected in the logistics industry.

In the Hamadori region, as evacuation orders for the area are steadily being lifted, it will become increasingly more important to create actual industries, and not just R&D bases, as well as activities to improve the living environment around the bases.