On October 13, the Strategic Policy Committee, under the Advisory Committee for Natural Resources and Energy (chaired by Takashi Shiraishi, Chancellor of the Prefectural University of Kumamoto), launched deliberations toward issuance of the next Strategic Energy Plan. 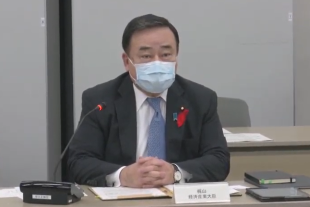 The current Strategic Energy Plan, Japan’s fifth, was decided upon by the Cabinet in July 2018. It presents a goal for an energy mix to 2030—namely, the steady realization of an energy mix with a nuclear energy component of 20-22% and a renewable component of 22-24%—along with related policies to 2050, and goes on to discuss the challenges in energy transitions and decarbonization technologies.

In an address at the start of the recent meeting, Hiroshi Kajiyama, head of the Ministry of Economy, Trade and Industry (METI) noted that the legal deadline of 2021 for reviewing the strategic plan was approaching, adding that next year would also mark in achieving the goal of “3E+S” (the three E’s of energy security, enhanced economic efficiency and environmental compatibility, along with the S of safety). He also identified several issues in realizing a carbon-free society a decade since the giant earthquake of March 11, 2011, calling it a turning point.

Minister Kajiyama went on to address the reconstruction of the nuclear-accident area in Fukushima, saying that it must be carried out steadily, and emphasized that energy policy must be implemented with safety as the top priority, reiterating that the lessons learned from the accident would be the starting point.

The committee will proceed with topics first by identifying, as early as possible, the potential issues that will exist in the latter half of this century, then by verifying progress toward the 2030 targets and further activities.

At the previous meeting of the committee, held in July, the members primarily discussed changes in the energy environment stemming from the “coronavirus shock.” At the October 13 meeting, meanwhile, a representative of the Agency for Natural Resources and Energy, under the Ministry of Economy, Trade and Industry (METI), identified changes in domestic and international energy circumstances since the issuance of the current Strategic Energy Plan, also presenting issues for deliberation toward the next strategic plan.

Among matters to be discussed will be the global movement toward decarbonization, increasing energy self-sufficiency, rebuilding supply chains, efforts on the demand side, and maintaining Japan’s lead in technological development.

In the current Strategic Energy Plan, nuclear energy is positioned as “an important base-load power source contributing to the stability of the long-term energy supply-and-demand structure.”

At the recent meeting, Acting Chairman Akira Yamaguchi (engineering professor at the Graduate School of Engineering at Tokyo University) of the Nuclear Energy Subcommittee, under the Advisory Committee for Natural Resources and Energy, noted that inasmuch as the sustainable utilization of nuclear energy is essential for energy autonomy, it is necessary to establish appropriate systems and processes for the sake of efficient use.

Another participant at the meeting was Governor Tatsuji Sugimoto of Fukui Prefecture, who spoke from the perspective of a siting area when referring to recent movements in nuclear policy, which have included literature surveys in Hokkaido in selecting a high-level radioactive waste (HLW) final disposal site, the safety examination for the Rokkasho Fuel Cycle Facility, and a municipal decision on restarting the Onagawa Nuclear Power Plant (NPP). 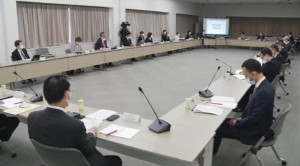 The governor then asked the national government to come to the fore on those and other activities, saying, “Public understanding will not be obtained by the government’s current responses, which have been passive up to now.”

Appearing at a meeting of the committee for the first time, President Jun Sawada of NTT Corporation, Japan’s largest telecommunications company, talked about cost issues in private power generation plans in anticipation of his company’s increasing need for power as a result of digitalization. Citing the examples of storage battery technology and AC/DC hybrid systems, he said that he hoped the Japanese government would demonstrate leadership on long-term R&D.

He also referred to his firm’s advancing involvement in innovative nuclear technology, citing the conclusion in May of a comprehensive cooperation agreement between NTT and the ITER International Fusion Energy Organization. He described his expectations for constructing new nuclear reactors and replacing older reactors with smaller ones, because of their high levels of safety and because they would make it easier to obtain consensus.

Other pertinent issues identified by various committee members included the introduction of hydrogen/fuel cell batteries, the phasing out of coal-fired generation, strengthening industrial competitiveness, and education.

Meanwhile, some at the meeting pointed to changes in values and actions by the public and corporations in the area of decarbonization, but said that doubts and concerns and the targeted time span for deliberations on the strategic plan had led to a “cessation of discussion” of the issue.