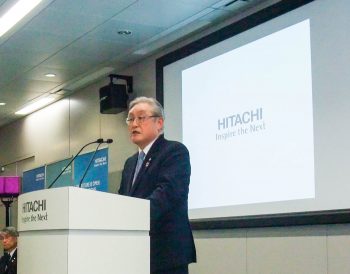 In 2017, the British Nuclear Authority issued approval for the project after completing its generic design assessment (GDA). One year later, Hitachi began serious negotiations on a financing model with the British government. Ultimately, however, the company determined that the parties were unlikely to come to an agreement on various conditions, so decided to freeze the project.

At a press conference held at Hitachi’s headquarters on January 17, the company’s president, Toshiaki Higashihara (photo), said that his firm had “made the utmost effort to provide clean energy without CO2 emissions.” He added that the GDA approval meant that Hitachi’s had been given high marks, so that the decision to freeze the project was solely based on economic logic.

Asked whether the project might be resumed, he said that one premise for its “unfreezing” would be the British government’s demonstration of a new financing scheme, adding that a “zero-based review of processes and costs” would be required for resumption, among other things.

In light of the virtual cancellation of an overseas construction project, he then expressed concern for the maintenance of the company’s technological capabilities in design and construction given the current domestic environment in Japan, where the focus is on restarting and decommissioning.

He also revealed a sense of crisis, saying that Hitachi would address the issue of ensuring future nuclear human resources with other plant manufacturers, while indicating the need to reach a conclusion as soon as possible.

On the future of Hitachi’s nuclear business, Higashihara said that the company intended to continue negotiations with the British government on nuclear power systems, while it would continue to carry out its business in Japan “based on the strength of Hitachi’s proven reliability and technology.” He emphasized the need for broad engineering discussions on various issues, including the stable supply of electricity and environmental protection.

Meanwhile, at a press briefing after a cabinet meeting held on January 18, Hiroshige Seko, Minister of Economy, Trade and Industry, noted several issues pertaining to international nuclear development in response to a question about the freezing of the Wylfa Newydd project, as follows:

The minister then stressed, “While nothing can be said generally, as the business environment of each country is different, Japan—which experienced the [March 2011 nuclear] accident—can still contribute to the world through its efforts to improve nuclear safety.”