On February 27, the third review mission from the International Atomic Energy Agency (IAEA) in regard to decommissioning the Fukushima Daiichi Nuclear Power Station completed its schedule and delivered a preliminary summary report to the Japanese Ministry of Economy, Trade and Industry (METI). 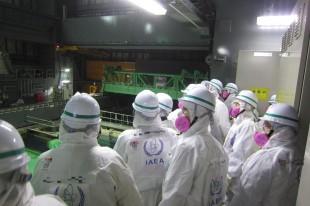 The mission, consisting of 15 decommissioning experts, had been visiting the site since February 9, with meetings held with relevant parties to exchange views.

A major purpose of the mission involved the state of the follow-up activities made after the previous mission in November and December 2013. In that respect, the report praised the implementation of decommissioning activities, saying, “Japan has made significant progress,” while noting also that “the situation remains very complex.”

In the short term, it says, the continuing increase in volume of contaminated water is a “challenge that must be resolved in a sustainable manner.” One of the biggest long-term issues, it concluded, is the removal of fuel debris.

Meeting a press group on February 17 in Tokyo, Team Leader Juan Carlos Lentijo, director of the IAEA’s Division of Nuclear Fuel Cycle and Waste Technology, enumerated the points on which the most progress had been made.

In organizational aspects, the system of responsibilities was made clear by the creation of the Fukushima Daiichi Decontamination & Decommissioning Engineering Company and the Nuclear Damage Compensation and Decommissioning Facilitation Corporation (NDF).

As for the status of efforts at Fukushima Daiichi, the report notes, among other things, the completion of the removal of spent fuel from the Unit 4 spent fuel pool and improvements in the treatment of contaminated water.

Responding to a question from a reporter about the release into the ocean of treated water containing tritium — which cannot be removed by the multi-nuclide removal equipment (known as the Advanced Liquid Processing System, or ALPS) — Lentijo said, “The question should be considered in the context of a strategy to improve overall safety, analyzing the various benefits and balances,” and obtaining understanding from stakeholders, including local residents and parties related to local fisheries.