From September 6 to 9, Deputy Director General Lydie Evrard of the International Atomic Energy Agency (IAEA)—and who is also in charge of the agency’s Department of Nuclear Safety and Security—met in Japan with officials from Japan’s Ministry of Economy, Trade and Industry as well as other agencies and ministries. 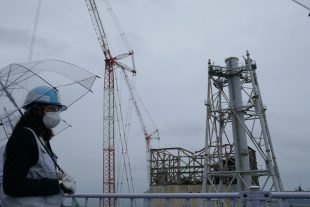 The purpose of her visit was to discuss schedules and items to be reviewed. toward the implementation of a review of safety of water treated by the Advanced Liquid Processing System (ALPS-treated water) at the Fukushima Daiichi Nuclear Power Plants (NPPs).

In April, the Japanese government announced its basic policy of releasing ALPS-treated water into the sea beginning in approximately two years. In the future, assessments are to be made of three issues: (1) the characteristics of the water to be released, (2) the safety of the process of releasing the water, and (3) the radiological effects on people and the environment, based on IAEA safety standards.

Given that reviews by the agency are expected to continue for several years, the parties now further agreed that a review team should come to Japan in December.

On September 9, the IAEA deputy director general, who hails from France, held an online press briefing at the Foreign Press Center for a total of 78 reporters, including foreign media from China, France, Germany, Indonesia, Russia, Singapore, South Korea, the UK and the U.S.

At the press briefing, she discussed the results of her visit to Japan, during which she met Kiyoshi Ejima, State Minister of Economy, Trade and Industry, Eiichiro Washio, State Minister for Foreign Affairs, and officials from the Ministry of the Environment and the Nuclear Regulation Authority (NRA).

Evrard also visited the Fukushima Daiichi site. She said, “There were substantial discussions in face-to-face meetings despite the COVID-19 restrictions. It was a meaningful experience.”

Moving forward, the IAEA will form a task force of professionals and specialists that will begin a review in several weeks of the release of the water to the sea by the Tokyo Electric Power Co. (TEPCO). The review will be performed from the viewpoints of regulation, safety and environmental monitoring.

The first report, Evrard said, would be issued before start of release of the water. Such a review is unprecedented for the IAEA, on account of the specific characteristics of ALPS-treated water, namely: (1) the massive volumes currently stored in tanks, (2) the release into the sea over a long period of time, and (3) keen local interest in the matter.

Toward the implementation of the review, the deputy director general emphasized, “We will commit ourselves comprehensively to being objective and transparent, and will share our information openly with the world.”

The visit by the IAEA’s officials was agreed to at a conference held on the August 19between Minister Hiroshi Kajiyama of the Ministry of Economy, Trade and Industry (METI) and IAEA Director General Rafael Mariano Grossi. Based on that agreement, a review mission by the agency, looking at the implementation of decommissioning at the Fukushima Daiichi NPPs in general, visited Japan at the end of August.

At a press conference after a Cabinet meeting on September 10, Minister Kajiyama said, “IAEA’s evaluation will be sent out to the world in order to obtain understanding from the international community.”