Director General Yukiya Amano of the International Atomic Energy Agency (IAEA) made a special presentation at the JAIF Annual Conference on April 13. He held a press conference after the presentation, at which he said that the IAEA welcomed the agreement reached by the five permanent members of the U.N. Security Council and Germany (the P5+1) with Iran on its nuclear development program. 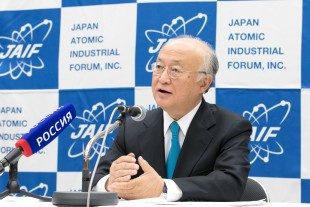 In response to a question about the NPT Review Conference, to start later this month, as well as the status of nuclear disarmament efforts, including negotiations on the Fissile Material Cut-off Treaty (FMCT), which have made little progress, the IAEA director general said that it was important that the three pillars — nuclear disarmament, nuclear nonproliferation and the peaceful use of nuclear technology — be “pursued steadily” from the IAEA’s viewpoint.

As for the of the slow restart of Japan’s nuclear power plants, Amano stated that the IAEA was not in a position to say anything to the country about it, and that Japan should pursue the matter in accordance with its domestic procedures, while ensuring safety.

He added, however, that some people in other countries have essentially said that restarting Japan’s NPPs was “necessary” for the sake of combatting global warming and maintaining economic growth.

Meanwhile, in reference to the March 2011 accident at the Fukushima Daiichi, he said that Japan should look beyond the negative and “seize the opportunity” to learn from the experience, so that the lessons might help improve nuclear safety throughout the world.

He also said it was necessary for Japan to share with the world its advanced nuclear science and technology applicable to such areas as food production and cancer therapy, not just nuclear power.

Amano also said Japan should carry out Fukushima Daiichi’s decommissioning, although he noted that it was a tremendous long-term challenge. He went on to say that Japan should continuously cooperate with other countries and international organizations, sharing the decommissioning experience “openly” as much as it could.