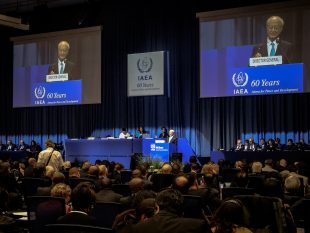 In a speech looking back on the role the IAEA has played in guiding uses of nuclear technology over the past 60 years, Yukiya Amano, IAEA Director General, said that the two nuclear tests conducted by North Korea this year constitute a great threat not only to Northeast Asia but to the stability of the world. He also expressed to the membership his intention to run for a third term as director general so that he personally could continue to serve the purposes of “Atoms for Peace and Development.” 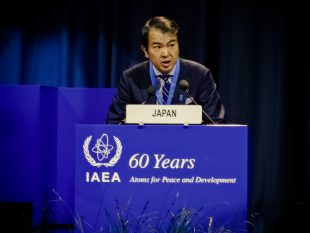 He also confirmed that Japan would steadily use plutonium, specifically through its program of MOX fuel use, under the principle of not holding plutonium without a purpose.

He went on to say that Japan would carry out decommissioning and measures to deal with contaminated water at Fukushima Daiichi in a manner open and transparent to the world, sharing the lessons learned from the accident with the global community. He said it would continue its efforts to ensure the safety of domestic foods, and called on the international community to implement its own import measures based on scientific grounds.