The two-week International School of Nuclear and Radiological Leadership for Safety, sponsored by the International Atomic Energy Agency (IAEA) and cosponsored by Tokai University, began on February 17. Since 2017, the IAEA has sponsored the school for young people from various countries who are engaged in the use of nuclear power and radiation as leading scholars, engineers and administrators. 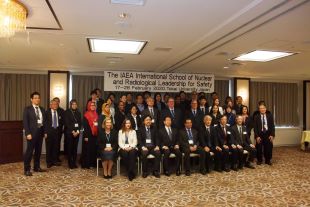 The purpose of the program is to develop internationally-minded young leaders in the areas of nuclear power and radiation safety. Its curriculum—which has garnered high marks by previous participants, and which is based on IAEA standards—is designed to foster awareness of the importance of putting priority on safety through case studies, game-style exercises and role playing. This is the first time that the IAEA school is being held in Japan.

The program will continue until February 28, with twenty-nine participants from Indonesia, Malaysia, the Philippines, Thailand, Vietnam, Bangladesh, Morocco, and Japan. After a series of lectures and exercises at the Tokai University Shonan Campus in Kanagawa Prefecture, the group will move north to Fukushima Prefecture on February 25, where they will visit the Fukushima Daiichi Nuclear Power Station (NPS), the Naraha Remote Technology Development Center in Naraha Town, owned by the Japan Atomic Energy Agency (JAEA), along with other sites. 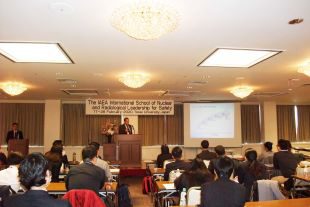 In his comments at an opening ceremony in Tokyo, Dr. Shahid Mallick, head of the Programme and Policy Unit within the IAEA’s Safety and Security Coordination Section, welcomed the students, stressing the significance of the school as a chance to make human contacts. “The school is an opportunity not only for learning but also for building networks,” he said.

As a guest speaker, Director Takashi Kiyoura of the Atomic Energy Division in the R&D Bureau of Japan’s Ministry of Education, Culture, Sports, Science and Technology (MEXT) referred to the challenge of meeting the new regulatory standards for decommissioning the Fukushima Daiichi NPS and research reactors. He also talked about the critical need to ensure human resources to that end.

Similarly, President Akio Takahashi of the Japan Atomic Industrial Forum (JAIF) talked to the participants, firstly about activities for developing human resources through the Japan Nuclear Human Resource Development Network (JN-HRD Net), with trilateral cooperation among industry, government and academia. He followed by saying that he hoped the participants would upgrade their skills through their time at the school, telling them, “Have a productive time.”