The 3rd annual conference of the Innovative for Cool Earth Forum (ICEF)—an assembly to discuss promotion of innovation in resolving climate change issues—was held on October 5 and 6 at a hotel in Tokyo. Initiated by Japan’s Prime Minister Shinzo Abe, ICEF was inaugurated in 2014, and has since been held annually. 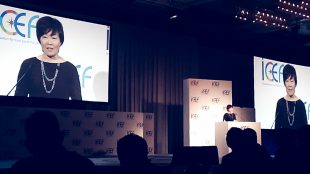 Taking part in the conference were over a thousand leaders in government, industry, academia from eighty countries around the world. Recognizing that global temperatures were on the rise, posing a great threat to humanity, the forum released a statement declaring that “international cooperation is imperative in every aspect, from policy to technology innovation.” It also released summaries of its discussions and roadmaps, including the concept of “Zero Emission House.”

The prime minister’s wife, Akie Abe, was present at the opening ceremony, and noted in her remarks, “Current attitudes and practices must be fundamentally reviewed to implement measures combating climate change and maintain rich, pleasant lifestyles.” She expressed confidence that discussions over the next two days would be creative and lead to important innovation, concluding, “New ideas will be generated out of our diverse abilities and strengths, drawn universally, across national borders.”

Next to speak at the conference was Takumi Ihara, Parliamentary Vice-Minister of the Ministry of Economy, Trade and Industry (METI), who was reading a message on behalf of METI Minister Hiroshige Seko. He said, “Although Japan imports most of its energy, it has achieved remarkable levels of industrialization and economic development through strenuous efforts to conserve energy and to develop advanced technologies and renewable energies.”

He continued, “By promoting greater use of Japanese innovation, including blue LED technology and electric vehicles, issues of global economic growth and responses to global warming can be simultaneously achieved.” He said that Japan would promptly ratify the Paris Agreement, an international framework for controlling greenhouse gas emissions, which was adopted at COP21 at the end of 2015, adding that Japan would also lead the world in realizing it.

In the plenary session of the conference, President Nobuo Tanaka of the Sasakawa Peace Foundation and former Executive Director of the International Energy Agency (IEA), among a number of experts and specialists from overseas also took the platform. 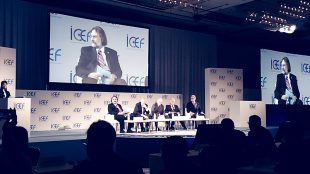 Referring to the importance of realizing “zero emissions,” which had been taken up as the main theme of the meeting, Tanaka expressed concern about increasing energy demand in China, India and other Asian countries, as well as oil dependence on the Middle East. He then stressed the necessity of a sustainable nuclear energy system and the technological development of the integrated fast reactor (IFR), based on his own projections to the mid-21st century.

At a side event to the annual meeting, IEA representatives gave a presentation on energy, climate change and the environment.