On January 25, the Japan Atomic Energy Agency (JAEA) announced that it had succeeded in producing hydrogen continuously for 150 hours using a thermal-chemical iodine-sulfur (IS) process that JAEA developed to more efficiently utilize the heat supply capabilities of high-temperature gas-cooled reactors (HTGRs). 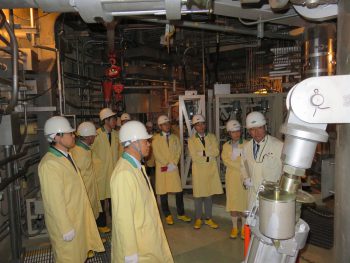 The thermochemical IS process combines three reactions using iodine (I) and sulfur (S) – sulfate degradation, a Bunsen reaction, and hydrogen iodide decomposition. It produces hydrogen by splitting water (an abundant resource) into H2 and O2 using heat generated without CO2 emissions. Moreover, the iodine and sulfur are circulated within the system, emitting no waste to the outside environment.

At the same time, given that extremely corrosive liquids such as sulfuric acid are used at high temperatures, for commercial use, it was necessary to develop technology for manufacturing equipment/facilities to identify materials suitable for different conditions and to validate their reliability. JAEA successfully developed durable reactor vessels for each reaction process.

JAEA will continue to accumulate operational data and carry out R&D toward practical use of the system to produce large amounts of hydrogen in a stable manner, including automatic operations control. It aims next at a demonstration of hydrogen production using the High-Temperature Engineering Test Reactor (HTTR). HTTR is now ALSO undergoing a safety compatibility examination under the new regulatory standards by the Nuclear Regulation Authority (NRA).